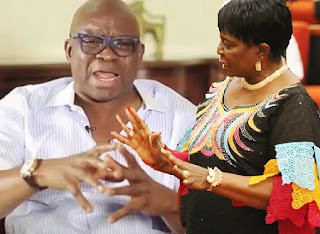 The Ilawe Ekiti born former lawmaker said that "leadership is not contested, it is earned. That's the problem Fayose and his people are having. Olujimi is the symbol of PDP in Ekiti State now."

The PDP chieftain traced the crisis within the party to the 2014 when the former Governor of Ekiti State, Ayo Fayose came back for second time. "It all started from when the former Governor, Ayodele Fayose came back for his second term in office in 2014. Apart from his one- man showmanship, he got up one day and declared his deputy as his successor, a step that angered members and result was a man drift of the PDP members to other parties".

Olugbade narrated how the former Governor, Fayose intended to force a candidate on the party as the state chairman despite expectation from party members expected him to play an unbiased leadership role.

On the issue of the recently conducted ward congress, Olugbade informed that it was the normal congress from Olujimi"s group that connected their congress during the daytime supervised by INEC and security but Fayose"s group conducted their own congress in the night without electoral umpires. Olugbade queried "Besides, how can you hold a congress without accreditation and the party"s register?  The electoral umpires wrote a report of what was monitored. The people purportedly inaugurated never did congress . That is why the party is where we are today" .

The legal icon maintained that "Immediately the tenure of an executive expires, it ceases to be. If there had been an election on the ground, those people who have been elected will take over authomaticall and their tenure automatically commences. It is implied".

Olubbade fingered the compromising attitude of the present deputy Governor of Taraba state, Haruna Mamu which came in the afternoon on March 7,to conduct the congress which was carried out in the night and was not known to the constitution and the party"s guidelines..

The former House of Assembly member opined that "a problem could not be solved from the cause but those that are familiar with the origin of the PDP problem in the state should be ready to proffer solutions so that party could be moved forward and be positioned in the state".
News