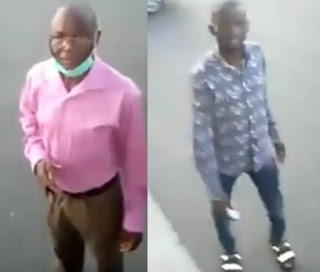 Mr Femi Adeoye, the Ekiti father who severely reprimanded his son for flouting COVID-19 regulations, has revealed the message his son sent to him from an isolation centre in the state.

In a viral video that circulated this week, Adeoye could be seen refusing his son’s offer to come home after the son travelled from Lagos to Ekiti State despite a ban on inter-state travel and against his father’s advice.

Adeoye, a retired road safety official, insisted the boy must undergo the required test to ascertain his health status.

In recognition of the man’s self-discipline, Governor Kayode Fayemi appointed him a COVID-19 Response Ambassador in the state.

The 65-year-old said his son has reached out from the isolation centre to say he was proud of him.

Speaking to the media about the incident, he explained, “I am a paramilitary officer; I worked with the Federal Road Safety Corps (FRSC) and retired seven years ago. I was brought up in a Christian home; I am a native of Osi Ekiti in Ido Osi Local Government Area of Ekiti State. When the pandemic started, I was following the trend, the government’s efforts and activities.

“Ekiti State was given a commendation on the stipulated measures. When a woman sneaked into Ekiti, the cases increased, the governor was not happy about it in his broadcast, Governor Kayode Fayemi announced the extension of the lockdown, with total monitoring of the entry points by security agents, visitors were quarantined and isolated.

At that time, my son who has been in Lagos called he wanted to come over, I told him not to come because of the situation, though he’s an applicant and might not be comfortable where he was, but this is pandemic. I asked him to hold on, but he insisted on coming. I immediately alerted security task force set up by the government.

“To avert trouble, I informed the NCDC and COVID-19 task force to be vigilant on a commercial vehicle that my son is coming from Lagos. The security eventually tracked him down at Efon, they took him to Fajuyi Pavilion in Ado Ekiti and informed me of the development. I headed to the place and insisted I couldn’t take him home, he has mixed with different people in the vehicle; they said I should take him that he doesn’t have the virus. But I refused because I don’t want him to be a risk to the family and Ekiti people in general. Moreover, the man who said I should take him and sent the video is not a medical doctor. I insisted he should be quarantined and isolated, not that I don’t love my son, but I want him to be at peace.”

Asked if did not think that his decision could have negative effects on his wife and son, Adeoye said, “As for the mother, ever before I took the step, I counseled her. The mother is 60, while I am 65 and the boy stands a risk. The mother totally supported my action, as for the son, if at all he was psychologically disturbed, that would be temporal, even the boy in isolation has been sending good comments, happy and proud of me. The governor said he would spend the 14 days in isolation.”
News