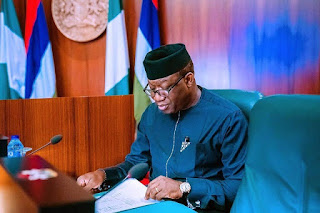 Governor Kayode Fayemi has warned criminals to steer clear of Ekiti state or face the consequences.
The governor gave the warning while receiving the Commissioner for Agriculture, Folorunsho Olabode, who recently regained freedom from his abductors, and leaders of the All Progressives Congress (APC) from Ilejemeje Local Government, who were on a thank you visit to his office following Olabode’s release.
Dr. Fayemi, who said he was happy to see Olabode regain freedom, noted that henceforth, the state would be no hiding place for criminals, as the government would beef up security to ensure safety of the citizens.
He restated his commitment to ensure security of lives and property.
The governor condoled with the Ilejemeje community on the death of the leader of Ilejemeje Local Government, who was killed by the hoodlums during the abduction.
He said that the government would work out a plan to support the bereaved family.
A member of the House of Assembly representing Ilejemeje Constituency, Tope Ogunleye, on behalf of the community, thanked the  government for its prompt response, which led to the release of the commissioner.
Olabode, who spent over a week in the kidnappers’ den, thanked Governor Fayemi and the citizens, as well as the security agencies for his release.
News