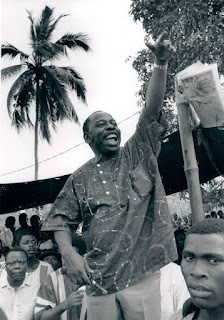 Below is the speech by the former President of the Association of Nigerian Authors before was hanged by the military junta headed by late dictator, General Sani Abacha:

My lord, since my arrest on the 21st of May, 1994 I have been subjected to physical and mental torture, held incommunicado and denied food for weeks and medical attention for months. My seventy-four year old mother has been whipped and arrested, my wife beaten and threatened with detention, the three telephone lines to my office and residence cut and the they remain cut to this day, my office and home have been ransacked on three different occasions and personal and family property, official files and documents taken away without documentation. I have been calumniated in the press and on satellite television before the whole world by a Rivers State government anxious to prejudice the mind of the public and to convince that public of my guilt even before trial. Only recently, before the United Nations Committee for the Eradication of Racism and Discrimination in Geneva, an official delegation of the Federal Government which included the Special Adviser on Legal Affairs to the Head of State, Professor Yazudu, declared me responsible for the murders which are the subject of this Tribunal, even before Tribunal has found against me or anyone else.

The fact that a case of homicide is being charged before a Tribunal set up under Decree No. 2 of 1987 speaks for itself. I am aware of the many strictures laid against the decree and this Tribunal by local and international observers. All the same, I
have followed the proceedings here with keen and detailed interest, not only because I am charged before this Tribunal, but also because, as a writer, I am a custodian of the conscience of society. I regret that the legal counsel I freely chose, Gani Fawhimi, the human rights hero and pride of this country, was forced to withdraw. His withdrawal has denied credibility to this
trial.

With the permission of the Tribunal, I would now like to make a filmic representation which will graphically demonstrate all that I have said here and amplify the details thereof.

My lord, we all stand before history. I am a man of peace, of ideas. Appalled by the denigrating poverty of my people who live on a richly-endowed land, distressed by their political marginalization and economic strangulation, angered by the devastation of their land, their ultimate heritage, anxious to preserve their right to life and to a decent living, and determined to usher to this country as a whole a fair and just democratic system which protects everyone and every ethnic group and gives us all a valid claim to human civilization, I have
devoted all my intellectual and material resources, my very life, to a cause in which I have total belief and from which I cannot be blackmailed or intimidated. I have no doubt at all about the ultimate success of my cause, no matter the trials and tribulations which I and those who believe with me may encounter on our journey. Nor imprisonment nor death can stop our ultimate victory.

I repeat that we all stand before history. I and my colleagues are not the only ones on trial. Shell is here on trial and it is as well that it is represented by counsel said to be holding a watching brief. The company has, indeed, ducked this particular
trial, but its day will surely come and the lessons learnt here may prove useful to it for there is no doubt in my mind that the ecological war the company has waged in the delta will be called to question sooner than later and the crimes of that war duly punished. The crime of the company's dirty wars against the Ogoni people will also be punished.

On trial also is the Nigerian nation, its present rulers and all those who assist them. Any nation which can do to the weak and disadvantaged what the Nigerian nation has done to the Ogoni, loses a claim to independence and to freedom from outside influence. I am not one of those who shy away from protesting injustice and oppression, arguing that they are expected from a military regime. The military do not act alone. They are supported by a gaggle of politicians, lawyers, judges, academics and
businessmen, all of them hiding under the claim that they are only doing their duty, men and women too afraid to wash their pants of their urine. We all stand on trial, my lord, for by our actions we have denigrated our country and jeopardized the future of our children. As we subscribe to the sub-normal and accept double standards, as we lie and cheat openly, as we protect injustice and oppression, we empty our classrooms, degrade our hospitals, fill our stomachs with hunger and elect to make ourselves the slaves of those who subscribe to higher standards, pursue the truth, and honour justice, freedom and hard work.

I predict that the scene here will be played and replayed by generations yet unborn. Some have already cast themselves in the role of villains, some are tragic victims, some still have a chance to redeem themselves. The choice is for each individual.

I predict that a denouement of the riddle of the Niger delta will soon come. The agenda is being set at this trial. Whether the peaceful ways I have favoured will prevail depends on what the oppressor decides, what signals it sends out to the waiting
public.

In my innocence of the false charges I face here, in my utter conviction, I call upon the Ogoni people, the peoples of the Niger delta, and the oppressed ethnic minorities of Nigeria to stand up now and fight fearlessly and peacefully for their rights. History is on their side, God is on their side. For the Holy Quran says in Sura 42, verse 41: "All those who fight, when oppressed incur no guilt, but Allah shall punish the oppressor." Come the day.