Four Murder Suspects Sentenced To Death by Hanging in Ekiti 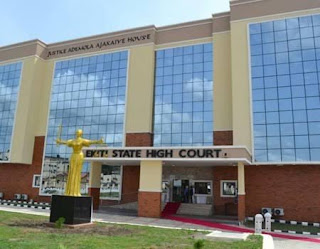 Newsmen report that Justice Oluwatoyin Abodunde gave the death verdict, saying the prosecution had proved its case beyond reasonable doubt.

“I am persuaded that in the instant case, prosecution has proved the ingredients of murder beyond reasonable doubt by convincing and compelling qualitative unbroken circumstantial evidence and I so hold,” the judge said.

The judge said the accused caused the death of Samuel Oloyede (70) which contravened Section 316 of the Criminal Code, Cap C 16, Laws of Ekiti State Nigeria and the provisions of Section 301 (2)(2) of the Ekiti State of Nigeria, Criminal Justice Law, 2014.

The act, according to the charge sheet, was committed on or about 5th of April, 2017 at Odo Owa Ekiti, Ijero Local Government Area of Ekiti State.

The accused were first arraigned on Feb. 12, 2018 when the charge was read and interpreted to them, although they pleaded not guilty.

According to witnesses, the deceased was a pensioner who operated a brothel in his personal house as a means of livelihood where all the accused also lived.
They said there was a misunderstanding between the deceased and the accused persons on payment and sharing of revenue.

The witnesses testified further that the accused vacated the premises with the deceased missing and he was later found dead under a heap of clothes with his hands tied.

The matter was reported at the palace and later at Ijero Police Station.

To prove his case, the prosecutor, Oluwatoyin Marqus, called 12 witnesses, including the Investigating Police Officer and the medical personnel who conducted post mortem examination on the cause of the death of the deceased.

The accused, who had Chris Omokhafe as defence counsel, called no witness.
News Photo Speak