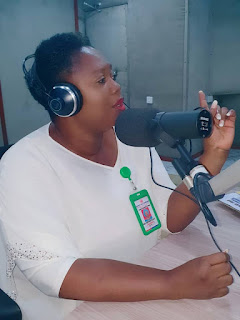 The Executive Chairman of Ado-Ekiti Local Government, Mrs Omotunde Fajuyi has backed the decision of Ekiti state government to slash salaries of all political appointees in the state by 50%

She made her view known  during a live interview programme on New Cruise FM in Ikere Ekiti on Thursday.

Mrs Fajuyi added that slashing of political appointees' salaries by the state government was part of the sacrifices on their part to cushion the effect of lockdown occasioned by COVID-19.

She furthered said that before the state government decision, elected political office holders, appointees and management staff of her Local Government had gathered resources to buy food items as relief packages for the people to cushion the effect of COVID-19 lock down.

The council boss said thousands of little relief packages were distributed to Ado-Ekiti indigents as appetizers before the State government main package came in big form.

She said Local Government chairmen were given free hand to run council's affairs under the able leadership of Dr Kayode Fayemi.

Speaking about her political experience, the Ado-Ekiti Local Government chairman said she took after her father in politics and has served in various political positions with untainted records.

According to her, her late father and husband  encouraged her to participate actively in politics. She said anybody that wanted to be positively involved in politics should ensure real participation at the grassroot level.

She thanked her party APC and the state governor for the opportunity given her to serve and promised to continue in bringing the dividends  of democracy to the door step of people at the grassroot.

While assuring the people of promoting the virtues of Omoluabi as epitomized by Governor Fayemi, the Council boss gave kudos the Governor's wife, Erelu Bisi Fayemi for her supportive roles.
News