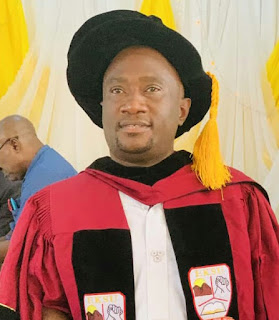 The Alumni Association of the Ekiti State University has donated cash gifts and other palliatives to its needy members, administrative staffs and some students to cushion the effect of the pandemic COVID-19 disease.

A release by the association's National Publicity Secretary,
Adefela Adeleye disclosed that "the transparent process which made different categories of people in/from the University, students and some of the recently sacked members of Staff of EKSU, smile in this period of the COVID-19 lock- down, has further re-vitalized,  re-energized and proliferated the trust in the present leadership of the Association."

In what appeared like a magic just in less than two weeks, over two hundred people benefitted in the palliatives. The first set of beneficiaries were names submitted by each of our nine local (state)  chapters which include Ogun,  Lagos,  Abuja, Ekiti,  Kwara,  Kogi,  Osun,  Ondo and Oyo.

A special category  of members who was in dare need for cash intervention benefitted from the Cash palliatives . Among these people were those on health emergency and those who were recently dis-engaged from the work force of EKSU.  It is on record also that before now,  the President had assisted some of them with  food palliatives.

It would also be recalled that recently the President was informed about the situation of thirty six of our French students who are presently undergoing further study in Togo.  The programme is compulsory and part of the requirements for the completion of their course, as it exposes them to a more practical language environment and culture. Although the University had approved a token for them, the Association also deemed it fit to give each of them five thousand naira #5,000 . These students are important us. They are not yet part of the association,  but our belief remains that they are part of the future of the Association. They won't forget a day like this.