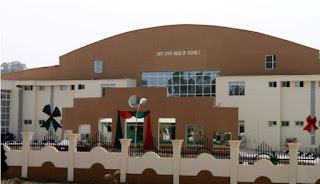 As part of efforts of the Legislative arm of government in Ekiti State to cushion the effect of the Covid -19 Pandemic, the Ekiti State House of Assembly has donated food items to the junior staff in its workforce. The food items include bags of rice, beans, among others.

Presenting the items on behalf of the 25 other  Lawmakers to the Chairman, Parliamentary staff Association (PASAN) Ekiti Chapter,  Comrade Gbenga Oluwajuyigbe and the Clerk of the House Mr Tola Esan at the Assembly Complex, the Speaker of the House, Rt,  Hon. Funminiyi Afuye stated that the donation was borne out of the Lawmakers passion for  the welfarism of the legislative support staff, at a time the world is been ravaged by the pandemic.

Rt.Hon. Afuye who expressed satisfaction in the conduct of the legislative workers since the inauguration of the 6th Assembly,  reiterated the commitment of the 26 Lawmakers of the House of their support to the staff of the  Assembly and the Assembly Service Commission.

Afuye who was accompanied by the Leader of the  House, Hon.  Gboyega Aribisogan, the deputy leader, Hon. Tajudeen Akingbolu and other lawmakers, enjoined the Union Chairman to ensure equitable distribution of the palliatives among the Junior Officers.

It be will recalled that barely a month ago, the 26 Lawmakers announced the donation of their April, 2020 salary to the State Government, as their contributions to the fight against the Covid- Pandemic in the state.

Receiving the food items on behalf of the workers, the Chairman, Parliamentary Staff Association of Nigeria(PASAN) Ekiti state Chapter, Comrade Gbenga Oluwajuyigbe thanked the Speaker and other Lawmakers for their intervention through the provision of food items at this material time and pledged that the workers would reciprocate the good gestures of the Legislators by putting in their best to the development of the legislative arm of government.

In his thank you message, the Clerk of the House, Mr Tola Esan commended the initiative of the Lawmakers on the palliatives and described  the gesture as laudable which would go a long way in the minds of the legislative staff, most especially the junior officers.
News