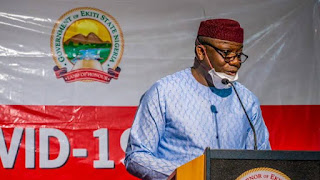 It may be speculative at the moment to predict when the Coronavirus pandemic will wear off. The next days, nay, several months -and it may roll into year- may still witness the curves, be it flattened, U-shaped, N-shaped or even W-shaped. The shadow will continue to cast on the globe for some time. But the beauty in this kind of fatality is that it is not only claiming casualties, it is also resetting the globe, and it is resetting the progression of every system as well. Surely, as the script writes, it is highlighting the actions of the various leaders, home and abroad, for posterity.

In Nigeria, we are not short of leaders; that’s for sure. Now that leaders everywhere have been forced to pivot to the new normal of virtual collaboration, whatever our thought about leaders was before the outbreak should begin to change. But one thing must remain truer now than ever: The great ones would set themselves apart by effectively influencing and empowering others.

However, we are still short of leaders who are selfless, brave, courageous, honourable and believable to lead during a global mega-crisis as we are suddenly thrown into today. This is not a criticism of leaders or the state of leadership as a practice; instead it is a harsh look at the reality that most leaders alive in Nigeria have not been presented with the demand to lead in such unprecedented circumstances.

Leadership requires proclivity for hard work. Spice this with making oneself available and to lead with empathy, more importantly in an uncertain, fast-moving crisis like Covid-19 has thrown up, then you are foraying into what is making Ekiti State stand at the moment. It does not require any soothsayer to foresee that the state, which incidentally was the third in Nigeria to be visited by the COVID-19 plague, would be one of the first to come out of it, and with much fewer casualties. This is neither a mere wish nor a palliative statement. Rather, it is a statement of fact, deductible from the efforts of the state government in curbing the spread.

Three leadership qualities are doing the trick for Ekiti at the moment: proactivity, authenticity and empathy. The government would rather act in advance of a future situation, than react to it with panic. Long before the fatal infection strolled carelessly in, Governor John Kayode Fayemi, had set up a committee to take proactive steps. He was sincere in his raising the fear of the possible effect and sensitizing the people on preventive measures to take.

The governor matched his words with action by providing fund and materials, for the committee to work and set aside an isolation centre for a possible occurrence. That was two weeks long before the state recorded its index case. On sighting the first case, the governor introduced social distancing and followed it up with the lockdown in conformity with the global practice and as provided for in the Nigerian constitution. Empathically, he slashed his own salary and those of his aides by half, commenced distribution of food items to cushion the effects of the COVID-19 lockdown, through an already established Food Bank in the state. The gesture, according to the governor would go a long
way in meeting the people’s needs even while observing the social distancing and lockdown rules.

Fayemi was the first governor to own up to his own vulnerability when he surrendered self to be tested and went into self-isolation after confessing that he had interacted with two top federal government officials who just came back into the country and had tested positive. According to him, he was not so much concerned about himself as he was concerned about those others who could be infected through him, should he have tested positive.
At the risk of passing the buck, the continuous retention of Ekiti State on the list of Coronavirus cases in Nigeria and across the world is as-a-matter-of-factly traceable to the pliability of the security operatives stationed at the different border posts into the state. Majority of the cases recorded in the state are those who tested positive when they “illegally” entered from other states. Others are those detected through contact tracing. This is also being seriously addressed by Gov. John Kayode Fayemi with the recent inauguration of the Ekiti State Security Network Agency (Amotekun Corps) Board, to complement whatever was already on ground, and with specific instruction that they must ensure protection of residents of the state.

Days, running into week, the Ekiti case would flatten, only to spike again when a stranger sneaks in. No community transmission has occurred to date. Globally, the total number of coronavirus cases recorded is now close to four million, Out of this figure, Nigeria as a country is hovering above 4,000 with an average of 200 transmissions daily. But the Fayemi government has refused to take for granted the fact that it is non-sporadic in Ekiti as elsewhere. It keeps putting measures in place in anticipation of a possible surge. Plans are now in the works to open COVID-19 testing laboratories in the state.

Ekiti was its Number 3 point of call when the plague landed in Nigeria. That was on 18 March 2020. As at that time, Lagos had witnessed only two cases and Ogun, the second state, had only one. The Ekiti index case was the forth in the entire country. It is recalled that the first in the series of confirmed cases of the pandemic in Nigeria was announced on 27 February 2020. An Italian citizen who works in Nigeria and had returned on 25 February from Milan tested positive in Lagos for the virus, caused by SARS-CoV-2. On 9 March 2020, a second case of the virus was reported in Ewekoro, Ogun State, a Nigerian citizen who had contact with the Italian citizen.

On that 18 March, all other States had none. But today, there has been a sharp rise in the cases of COVID-19 in those other states than Ekiti. All the states in the Southwest, for instance, have overtaken Ekiti. Lagos’ cases alone is about half the total of the entire Nigerian cases, so is Ogun that is now spiking in hundreds, neighbouring Ondo State did not record its first case until 16 days after that of Ekiti, yet it is balancing its figure with that of Ekiti right now. Oyo recorded its first case four days after Ekiti, but now boasts far higher number. Osun had its first case 10 days after Ekiti, but now spikes in scores.

From the index to the latest, the COVID-19 record of Ekiti has been substantially fed by influxes; a case of people leaving his or her place of domiciliation and foraying into the state for whatever reasons. That people keep breaching the stay-where-you-are order is known to nature. Humans would rather transfer than transfix. Those spreading the virus must have persuaded themselves that the order was not strong enough to hold them down. What baffles one however, is how they often beat the security network in place.

Fayemi's proactive and disciplined leadership has gained traction from far and near. In a rating recently conducted by an agency known as StearsBusiness on the COVID-19 State Response Index, Ekiti a resource-challenged State came second after the resource-rich Lagos State, leading all other 34 States plus FCT.

By borrowing from the Fayemi experience, leaders would consistently generate innovative, creative solutions to intractable challenges. It will be incumbent on them to put themselves in another’s suffering, to feel with empathy and think with intelligence, and then to use their position of authority to make a path forward for their followers.

Fayemi is not just applying his leadership style in Ekiti alone. His front-burner role at the national level, especially as the Chairman of the Nigeria Governors’ Forum is commendable. Day in, day out, you would find him making useful suggestions about solving the pandemic puzzle and its socio-economic effect. The federal government has found in him a reliable ally by taking to his advice, which he gives often as the NGF Chair,

As the uncertainty looms, we must prepare for a new normal. Every country that is worth the salt should start looking for steady leaders capable of navigating calmer waters in a post Covid-19 world. Nigeria should not be an exception in watching out for great, resilient, and positive leaders, who would continue to rise up and help deflect whatever the virus throws our way. They have started doing so already as we see in the example of the Governor of Ekiti State and Chairman of the Nigeria Governors’ Forum, Dr. John Kayode Fayemi, CON. He is a leader to watch.