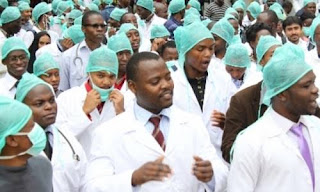 The national body of the Nigerian Medical Association (NMA) sitting in Abuja has directed members to henceforth work between the hours of 8.00am and 4.00pm, to give enough time for them to return back home.

This was contained in a release signed by the President of the association, Dr. Francis A. Faduyile on Tuesday. This according to him was to stop members of the association from working late and mitigate the embarrassment to them  in the process of carrying out their lawful duties.

The statement read further: "The NMA observed with dismay the pains and anguish foisted on our members returning from and going to work on Tuesday 19th May night by security operatives who arrested and detained them in the name of implementing the lockdown curfew.

"Based on the foregoing, notice is hereby given to all Medical and Dental practitioners  that since the security operatives have unilaterally withdrawn the exemption given to us by Mr. President as essential service providers as seen in some States and the FCT, I wish to state as follows:

"That with effect from today,  Wednesday 20th May, 2020, all medical and dental practitioners should henceforth work between the hours of 8.00am and 4.00pm, to give enough time for them to return back home."

Meanwhile, the Nigerian Medical Association in Lagos State has asked its members to embark on an indefinite “sit-at-home” industrial action over alleged harassment and intimidation by security agents in the state.

The NMA gave the “stay-at-home directive” in a statement signed by its Chairman, Dr Saliu Oseni, and Secretary, Dr Ramon Moronkola, on Wednesday.

According to the statement, the directive takes effect from 6.00 pm.

The doctors accused police officers in Lagos of acting contrary to the directives of the Federal Government on lockdown order, noting that their members are unsafe.

The statement read, “We have observed that despite the directives of the President of the Federal Republic of Nigeria, President Muhamadu Buhari, through the Presidential Taskforce on COVID 19, which was clear on the exemption of essential workers including doctors and other health workers from the ongoing lockdown/movement restrictions, (but) the Commissioner of Police in Lagos State, Mr. Hakeem Odumosu, has been issuing conflicting directives on social and mainstream media to the effect that essential workers, including doctors and other health workers, are NOT exempted.

“As a direct result of the conflicting directives of the government and the Lagos State Commissioner of Police, the Lagos State branch of Nigerian Medical Association was inundated yesterday (Tuesday) evening of several cases of harassments and intimidation of doctors and other health-workers by officers and men of the Lagos State Police command to the extent that even Ambulances carrying patients with emergency cases were impounded. This has become a recurrent issue.

“The Lagos State Branch of the NMA has resolved that it is presently unsafe for members to continue to provide healthcare services under the present confused arrangement.