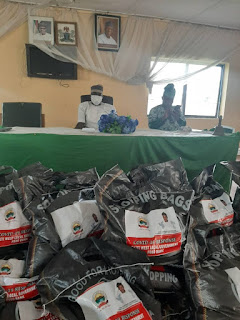 Chairman of Ekiti West Local Government, Hon. Kareem Agunbiade, on Friday, 1st May, 2020 distributed over 300 bags of food items across the council area to cushion the effects of the lockdown due to COVID-19.

Announcing the modality for the distribution, the Chairman appreciated the good people of Ekiti West for their cooperation and support during the lockdown. He added that the gesture was to ease the difficulties being faced by the people while observing the Stay-at-Home order of the State government.

He further solicited their support for Dr. Kayode Fayemi's led government. According to him, "I appeal to the good people of Ekiti West to support Mr. Governor at this critical moment, especially in his efforts toward making Ekiti a coronavirus-free state."

In his speech, the Leader of the Legislative House, Rt. Hon. Deji Ogunkuade who noted that the collaborative efforts of both the Executive and the Legislative arms of the Council made the provision of the palliatives a reality,  commended the Chairman for his exemplary leadership. He added that the House would continue to support him in his quest to make life more meaningful to the good people of the local government.