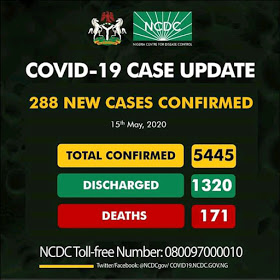 A total of 288 new cases of COVID-19 has been recorded in Nigeria, bringing the total number of confirmed infections in the country to
5,445.

Announcing via its official Twitter handle on Friday night, the Nigeria Centre for Disease Control (NCDC) said the country recorded the new cases of COVID-19 in the last 24 hours.

The tweet further revealed that Niger and Ekiti State had four cases, Oyo, Delta and Bauchi State had three cases each, Kwara State had two cases and Edo State recorded one case.

The NCDC also said that four new patients have been confirmed dead to the virus in the country, bringing the total number of deaths to 171.