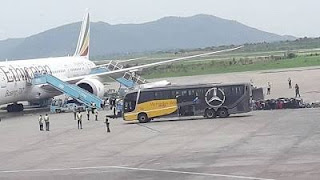 One hundred and sixty stranded Nigerians in the United States of America arrived the Nnamdi Azikiwe International Airport, Abuja, yesterday following their evacuation. An update by the Ministry of Foreign Affairs said an Ethiopian Airline ET 8509 conveyed the returnees to Nigeria.

The evacuees comprise 92 males, 60 females and eight infants. The evacuation was originally planned to take place on Friday with an Ethiopian Airline flight ET509, but was later moved by a day to Saturday, and the flight changed to ET 8509 according to a circular by the Nigerian Consulate, in the United States.

The plane departed the Newark International Airport, New Jersey on Saturday around 8:20 p.m. local time (1:20 a.m. in Nigeria on Sunday). It was gathered that the Federal Government had stationed five luxury buses and a coaster bus at the airport to move the returnees to isolation centres as soon as they disembarked from the plane.

The Minister of Foreign Affairs, Geoffrey Onyeama, had last week, said the Federal Government had made arrangements for hotel accommodation in Lagos and Abuja where the evacuees would undergo a mandatory 14-days supervised quarantine.

The minister had also said the hotels had been inspected by the Port Health Services, the Nigerian Civil Aviation Authority, the Nigerian Centre for Disease Control, the Office of the National Security Adviser, the Ministry of Foreign Affairs and the IPC.
News