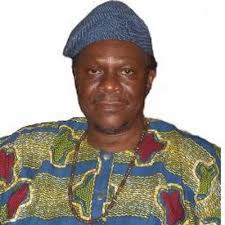 Professor Olabode Obafemi Sowande is 72 years old having been born on May 2, 1948.

Currently, head of the Department of Drama at Ajayi Crowder University, Oyo, the man popularly known as Bode Sowande has written a lot of drama pieces and taught quite a number of scholars and professionals.

When we started the very first state chapter of the Association of Nigerian Authors, ANA, I mean Oyo State ANA, Uncle Bode as I fondly call him, made the premises of his Odu Themes Meridian, Agbowo, Ibadan, available for us whenever we ventured out of the Unibadan Theatre Arts where we started holding our meetings.

Prof Sowande served as the Association's General Secretary during late Ken Saro-Wiwa's tenure as President, 1990-1993.
Uncle Bode, birthday provides one the opportunity to look back and give glory to the Almighty God for His blessings over the years.

It also provides an opportunity to take an introspective look one's life with a view to be even more committed to those things that will edify humanity further.

Going by your antecedent Prof, I know that societal health, human development and purification of the soul matter to you. I suspect that you will even dig deeper and will achieve more in these respects. A hint of this was given in your inaugural lecture in February this year, 2020.

Happy Birthday as we try to 'know ourselves' more and say 'farewell to all the carnibals' in our public life.

Wao, so its two years that we assembled at Ibadan for his 70th birthday anniversary.

Professor Bode Sowande who we call doki is a man of many parts and one who cannot be forgotten in a hurry once your path crosses.  I am a founding member of Odu Themes Merridian and was his main lighting man for several years. Some  of the wonderful jobs I did, he paid for some and...

What I admired in him is his creative acumen and meticulous ways of doing things. He is a slave driver to achieve perfection. A writer, actor, director,  manager and is spiritually gifted.

"I started as a dancer you know " he was fond of saying then. At Olabisi Onabanjo University where I once lectured,  he was my HOD and the teaching continued.  I bless God on his behalf and wish him a wonderful birthday full of love and happiness.  May he live longer than his forbears.

I learnt a lot from him both Good and good. One of the things I can't forget is a song he claimed he learnt from Kongi himself.  I cannot write the lyrics but here is the tonic solfa: "re mi mi mi re (3ce) mi mi do, mi re re re mi mi mi (2ce), mi mi mi mi mi re , mire domire mire domire. (If u know you know)".

By the way doki, I'm still waiting for your call as to that parole o.