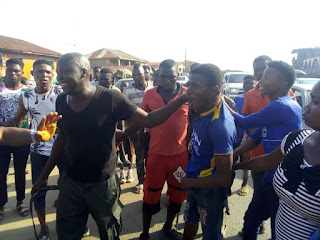 A young man, Tunde Tayo Olatunji would have been linched to death if not for the prompt intervention by a mobile police officer who claimed anonymous at Oke Ori omi, Ado Ekiti, Ekiti state capital on Thursday.

It was alleged that Olatuntunji snatched the phones and cash under the pretence of charm. Noticing the development, the crowd at the slum area of Atikain kain immediately surrounded Olatunji when he was trying to escape.

Olatunji who is believed to be in his twenties while answering questions denied said he did not snatch a phone as being alleged but it was a disagreement that happened between him and his co gamblers.

According to a witness, it was in the cause of playing the cards and wanted to leave with the proceeds that an alarm was raised and in the course, he was labeled a phone snatcher.

Olatunde was however whisked away on a bike to the Okesa police station for further questioning.
News