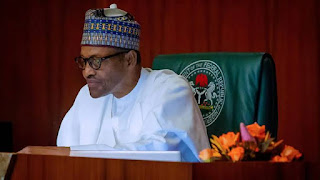 As the nation marked the 59th Independence Anniversary on October 1st, 2019, President Muhammadu Buhari has scored himself high in terms of performance.

While commenting on the state of the nation state in the fifthy ninth Independence anniversary, Buhari who is in his second term in office as the president noted that Nigeria would overcome her challenges. He stated this in a state wide Independence broadcast to the nation on October 1, assuring that Nigerians should expect more dividends of democracy in terms of infrastructure and development.

He emphasised that more efforts would be put to improve on the security of the nation vis a vis the economy. Buhari ordered the Central Bank of Nigeria to release N600 BN for the infrastructural development of the country as captured in the 2019 fiscal budget. He however asked for more cooperation from Nigerians in order to continue to discharge his duties effectively.

Meanwhile, Vice president, professor Yemi Osibajo has equally stated that despite all challenges, God has a mission of taking Nigeria to the promise land. Osibajo stated this at the 59th anniversary of Nigeria at the Ecumerical Center, Abuja on Sunday which he linked Nigeria to the Israelites whom God  directed to be taken to the promised land but encountered challenges on their way.

Osibajo said if only Nigerians would imbibe Godly principles, that the promise land is sure. A former military Head of state, General Yakubu Gowon at the service however agreed that Nigeria was facing dawnting challenges that cots across insecurity, economy, others but expressed strong hope that 'Nigeria would soon overcome them ' He however charged all the security operatives to be alive to their responsibilities in order to secure Nigeria and asked Nigerians to seek God's face.

However, Oluwarotimi Akeredolu of Ondo state on Sunday scored high president Muhammad Buhari's led government on. performance on the nation's fifty ninth Independence anniversary at the Redeemed Christian Church of God (RCCG) at Oke Ijebu, Akure the state capital. Akeredolu, who was represented by his deputy, Agboola Ajayi at the Thanksgiving service noted that similar challenges being faced in the country. He said, "As you are aware, many developmental projects embacked upon by our government have been completed and our people are already deriving the benefits from them". He assured that his government would not relent on its effects in assuring full delivery of its mandate especially in the provision of infrastructural facilities, security and welfare of workers and the citizenry.

In a swift reaction, the legal luminary and founder of Afe Babalola University, ABUAD, Are Afe Babalola has reacted to the celebration of the 59th Independence anniversary as unnessasary instead, Nigerians should use the occasion to fast and pray. He stated this in an article :'Examples are better than the precepts '.

Babalola satirerised Nigeria as a family of five children with a father and mother with first child as a medical doctor was kidnapped and later died. The second child, an Engineer died due to armed robbery attack, the third child who is a lawyer died in the course of accident due to deplorable road.

The fourth child, a graduate of Agriculture, chose to farming on a vast land at least to practice what he knows best was attacked by the herdsmen and eventually died. The fifth child is a jobless graduate and due to his siblings challenges coupled with his own predicament, he was hypedthensive, taken to the one of the ill-equipped hospitals. Worst still, the father, a retiree has not been paid his gratuity and pension for years and the wife is a pretty trader who has lost hope, again, hospitalised.

Babalola asked: "Is there anything for this family to celebrate on October 1? This is a question for all of us to answer. Babalola posted.