Exclusive: Rites and Tradition: Things To know From The Demise of Oluyin 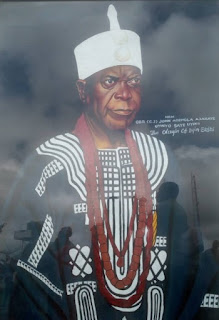 By
Tobilola Oyebanji and Adewale Ilesanmi

As we know, a rite is a religious custom or other solemn ceremony. The Paramount Ruler of Iyin-Ekiti, Oba (Justice) John Ademola Ajakaiye Oyinyo Saye Uyin II, who just 'Visited his Ancestors' was buried recently and the traditional rites following his demise have since begun.


However, Fountain Newsbreaker was in Iyin Ekiti to look into the traditional rites and customs of the Iyin Community on what needs to be done or put in place following the demise of any traditional ruler in the community.

Speaking to Fountain Newsbreaker correspondents, Oluwatobiloba Oyebanji and Adewale Ilesanmi, the Odofin of Iyin-Ekiti who is the highest Ranked Chief in Iyin Community, High Chief Ayodeji Esan, explained in an exclusive interview, the traditional rites to be performed after the demise of the Paramount Traditional Ruler of Iyin-Ekiti, which is the Oluyin Of Iyin-Ekiti.

HIGH CHIEF :  I can't tell you every detail about the rites but the ruling house had to tell some people in the community traditionally and then the most senior Chief which I am, will call the other senior chiefs for meeting before the announcement of the demise will be made.

After which the branches of all trees at the market square will be cut down, this is to inform the community and outsiders that the late king had pass on and other rites are done in private, there are specific chiefs who perform those rites which are not to be done in public or announced.

Usually there is no vacuum that is why the community will have a regent from the ruling house before the week runs out and fortunately there is only one ruling house-they are called the OKETAGIDIGIDI ruling house.

Although they have so many branches ,so many names but just one ruling house. There are twelve king makers and they have the power to select the next  oluyin of Iyin-Ekiti. This is done only when the ruling house had called for interested candidate which they will present before the king makers. The king makers will investigate them, do other rites before the proper selection.

As part of the traditional rite within seven days after all rites have been done before announcing the departure of a monarch and it mustn't Elapse seven days.


Watch Out For The Full Story. Only from the Stable of Fountain Newsbreaker
Entertainment News Photo Speak