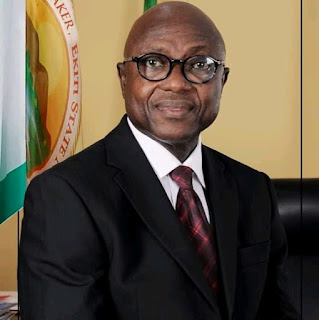 The Speaker of Ekiti State House of Assembly has condemned Tuesday's attack on the entourage of the wife of the State Governor, Erelu Bisi Fayemi, during a protest by students of the Federal University, Oye Ekiti.

In a press statement signed by the Special Adviser to the Speaker on Media, Akogun Tai Oguntayo, Hon Afuye condemned the unprovoked attack in its entirety, stressing  that the protest might have been hijacked by some unscrupulous elements, who joined the protest.

The Speaker therefore called on the Nigeria Police Force to investigate this criminal act in earnest to unravel those behind it as ''the house is also going to investigate the remote and immediate causes of the attack so as to forestall a future reoccurrence''.

The Speaker recognised the right of the students to peaceful protest but as stakeholders and ''leaders both of today and tomorrow, they should not engage in thuggery or allow themselves to be used by self- seeking individuals in the society''.  Rt Hon Afuye urged students to always  channel their grievances through the appropriate quarters.

It would be recalled that Ekiti State House of Assembly had engaged the Benin Electricity Distribution Company (BEDC) in the past on the need to provide uninterrupted power supply for the State.

Afuye then called on the BEDC to be alive to their responsibility in the provision of electricity regularly.

The Speaker who commended the good gesture of the Governor's wife in giving succour to the aged women across Ekiti State, therefore urged Ekiti citizens, particularly the people of Oye Ekiti to go about their lawful business as all necessary steps had already been taken by the appropriate authorities to maintain peace in the town and its environs.

He also warned trouble makers to stay away from Ekiti State, stressing that the state would not condone any act of brigandage, leading to wanton destruction of lives and properties.