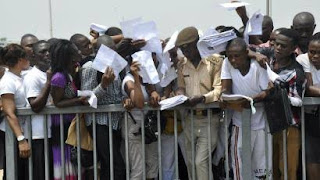 The Ekiti State Universal Basic Education Board (SUBEB) has announced a temporary suspension of the ongoing recruitment of teachers into public primary schools in the state.

This followed the huge crowd of job seekers that thronged the headquarters of the board in Ado-Ekiti on Monday. A good percentage of the applicants do not fall into the category of personnel advertised by the board.

The Chairman of the Board, Prof. Francisca Aladejana disclosed the postponement in an interview with journalists in Ado Ekiti on Tuesday,, hours after the commencement of the exercise. She said the recruitment process was put on hold in order to prevent stampede among the thousands of applicants that  thronged the SUBEB office to collect the application forms.

Aladejana who said that the Board is re-strategizing to make the employment forms easily accessible to applicants, stated that SUBEB may opt for the use of electronic application process so that applicants can download their forms without necessarily coming to SUBEB office.
The Board chairman disclosed that no fewer than 10,000 applicants had registered their names to collect the forms in the first day of the two-day exercise; adding that the Board cannot afford to let the applicants rush and injure one another in the process of jostling for the forms.

“Before the applicants came, we had made solid arrangements for the distribution of the forms. We had 16 centres, one for each local government so that we won’t have reasons for applicants rushing to collect the forms and to forestall too much crowd, we specifically indicated that we want only NCE holders and graduates with teaching subjects in the primary school. This had gone round but to our amazement this morning, we had unprecedented crowd; the crowd was unimaginable.

“The whole place was filled up. The candidates were rushing and were out of control.  We had pregnant women, nursing mothers carrying babies and women holding young children; all of them in the crowd. It was at that stage that we thought if we start distributing forms and people are rushing, there could be stampede. We don’t want any casualty”, she said.

Aladejana  who thanked Governor Fayemi for approving that the employment forms be made available to applicants free of charge said the governor was concerned about the unimaginable crowd and had directed the Board to re-strategize to ensure that all applicants get their forms without hitches.

The SUBEB boss who said the suspension was temporary disclosed government’s intention to conclude the recruitment process by the middle of September.

She advised applicants to be on the lookout for further information from SUBEB on how applicants can get their forms and its submission.
Job Opportunity News