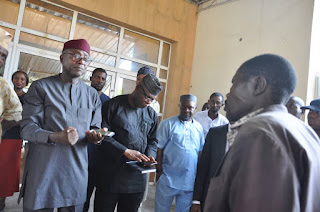 It took the timely intervention of the House of Assembly leadership under the Rt Hon Funminiyi Afuye yesterday to save Ekiti State from the face off among motorcyclists which could have led to wanton destruction of lives and property.

Crisis broke out when motorcyclists known as Okada Riders' Association stormed the House of Assembly to protest against the exploitation and harassment by their colleagues who were obstructing their daily business on the road. The protest was led by Mr Ogundele Filani who was apparently fuming while explaining their grievances to the Speaker.

Rt Hon Afuye, sensing the tensed up anger in the Okada riders who were numbering over 500 at the Assembly complex, appealed to them to maintain peace and resolve issues through dialogue rather than violence.

The Speaker who was surrounded by the Deputy Speaker, Rt Hon Hakeem Jamiu, Hon Ademola Ojo and his Special Adviser on Media, Akogun Tai Oguntayo, urged them to lodge their complaint to his office officially and that it would be addressed accordingly.

The Speaker told them that taking laws into their hands would rather jeopardize their aim. He then promised to look into their grievances if properly channelled. The leader of the Okada riders who was boiling with anger immediately calmed down his people and assured the House of Assembly of maintaining decorum in their protest. They however insisted that they did not want Okada riders union

Mr Ogundele Filani said they were protesting against unnecessary levies imposed on them by the leaders of the Union in Ado-Ekiti among which was purchase of a uniform apron at N3000 by each Okada rider despite the heavy levies their unions collected from them.

He alleged that the leaders have been feeding fat on the sweet of other members of the Union and called on the Assembly to save them from the union leaders.
News