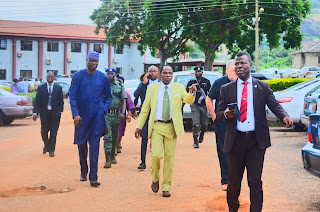 
A Delegation of Ekiti State Ministry of Justice and the Portfolio Lead for Justice Security and Conflict in Sub-Saharan Africa, British Council, Bob Arnot visited the Ekiti State University Teaching Hospital, (EKSUTH), Ado-Ekiti in a move to propose a Referral Centre for Victims of Sexual Violence in the State.


The Meeting which took place today, Monday July 15, 2019 at the premises of the Ekiti State University Teaching Hospital had the Attorney-General and Commissioner for Justice, Olawale Fapohunda proposing a  location for the Centre within the premises of EKSUTH.


According to Fapohunda, the Center would be a one-stop facility to provide adequate and speedy attention which will include medicals and counselling to Victims of sexual and domestic assault. He also emphasized that the Project has the support of the Office of the First Lady of the State.


In his reaction, the Chief Medical Director of EKSUTH, Prof. J.K Olabanji who revealed other challenges faced in the process of assisting victims such as failure to speak out, desire for confidentiality and trust, said that, "the issue of Sexual and Gender Based Violence has always been there all along but it is commendable that we have a government who is concerned about it. We therefore pledge our full support on this project".