I Am Standing With Busola: Let Me Stand in Peace - By Zouerat Adedoyin 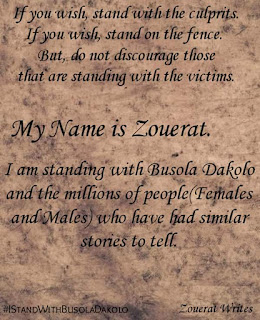 Some people have been sliding into my inbox, telling me "I am a  Muslim", that Busola's story is non of my business and it would be better for me to stand on the fence because there are different parts to a story. I am not the judge to adjudicate on the said matter. I know it couldn't have been easy for her coming out to lie that the pastor raped her, while the interview evidently took place in the church. But the fact remains that Busola was raped by the pastor. I watched the video where she opened up till the end and I could deduce from there that Busola is not the only girl that had been raped or sexually harassed by the pastor. She is just like the face of all the females that have been raped or sexually harassed by the pastor in that Church.

Although, most people doubted the authenticity, asking why did it take her that longer before coming out to say it? Why had she been utterly appalled for two decades? She never even realised she needed help. She didn't even know her psychological problem had begun since then until 2years ago. Because this things have damaged a lot of things in her.

Busola’s personal life is non of my business. People have diverted their energies, saying she gave birth before she married her husband, she is a virgin or not, she is wayward...  and so on! How about you guys going back to reflect on your own lives? The life of your spouse before you married him/her? Even as Muslim, most of us were once astray. We have lived the life we are not proud of before Allah retraced our steps back to Islam and now, we're made firm. So, how Busola is living her life is non of my business. The fact that she was raped is what concerns me most.

Try to do this...Have a round table meeting with all the females above 18years in your family, like a confession time. Tell them it’s healing session, tell them you won't judge them. Now ask them to tell you about their 1st, 2nd, 3rd sexual experiences. You open the floor by telling your story first. You would be amazed that most of them had been raped, one way or the other. There are strata of sex manipulation, etc. And you will also be shocked that it is being caused by people that they looked up to like Father, Brother, Uncle, Pastor, Imam, Teacher.

And that is why cases like these will be very difficult to eradicate because those who are preaching are expected to preach against it, are the main culprits. The bad is coming from where the good is supposed to come from.

This is not my first time of standing with somebody that I didn't know the background. All I am saying is we must always stand up for people so that others who are going through such things will be bold to come out and maybe, if the rapists realise that people are no longer shy to come out, they will stop.

I am standing with Busola Dakolo and the millions of people(Females and Males) who have had similar stories to tell.