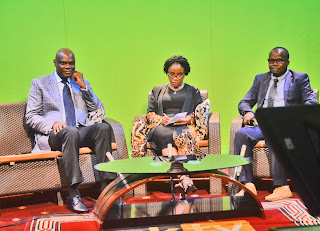 Ekiti State Attorney General and Commissioner for Justice, Olawale Fapohunda has reiterated the commitment of the Governor Kayode Fayemi's administration to abolish all forms of Sexual and Domestic Violence against Women and Children in the State.


Fapohunda made this Statement today Thursday, July 4th, 2019 on a TV Show, Day Break Nigeria on Ekiti Television (EKTV) while discussing other state matters relating to the administration of justice in Ekiti State, career development of Legal Officers, relationship of the Executive with the Judiciary, State interventions on gender, sexual and domestic violence, state of security among others.


The Attorney-General while describing the Governor of the State, His Excellency Kayode Fayemi as a Boss who has listening ears commented that the Ministry of Justice has made appreciable progress with the support of the JKF administration.


The Attorney-General stated that, "we started by improving the working environment of the Ministry of Justice for our Legal Officers and Non Officers alike, so that we have the most work-friendly environment in the State


"We are currently reviewing the Ekiti State  Laws. Recently, the Administration of Civil Justice Law 2019 was signed by the Governor, which is the first in the Country. Several other Laws have been put in place by this Government to make Ekiti State business climate investors' friendly and secured.


"We acknowledge the current situation in the State. We believe that laws should be enacted to effectively solve our societal issues and we are working on that".


On Prisons congestion, Fapohunda said, "Prisons reform is one of Mr Governor's justice sector reform agenda. So we are making moves to make sure that awaiting trial persons are given speedy attention, starting with the Police, before coming to the Ministry of Justice, because criminal investigations starts from the Police."


On the part of the Ministry of Justice, the Attorney-General explained that any file that is received from the Police gets attention within 24 hours to ensure that trials are not unnecessarily delayed.


Throwing light on the issue of appointment of Judges, Fapohunda acknowledged the need to fill the existing vacancies in the State by appointing more Judges in collaboration with the National Judicial Council (NJC). According to him, "it is our goal to have quality Judges and encourage our young Lawyers to pursue career progression."

Fapohunda however decried the increasing rate of Child defilement in the State and reassured the People of the efforts of the Government to curb this menace. "We opened a Sex Offenders Register in our first term in office and was reopened when we came back. When we also noticed that it was not enough, we introduced additional measures like naming and shaming, pasting of offenders pictures in his community, compulsory psychiatric test for offenders, posting of their picture on the Ministry of Justice website among others."

"We do not also dispute the fact that we need more awareness on these issues and that's is why we will be working with governmental and nongovernmental organization on this, because the Dr Kayode Fayemi's administration has zero tolerance for gender and sexual based violence",  he said.

On the Busola Dakolo rape allegations and as to if a case of twenty years could still be pursued, the Attorney General said time does not nullify crime. According to him, "the only problem we have is that our Police needs to be equipped in the area of investigation for instance a DNA centre where cases of twenty- thirty years could be reinvestigated. The State government is working on such project and we hope to achieve a great feat on it."

When asked of the position of the Law on Senator Abbo's apology, he said, "apologizing is good and it is also a good thing that the IGP has reacted to this issue but I'll say, if need be that he be prosecuted, that must be done".
News