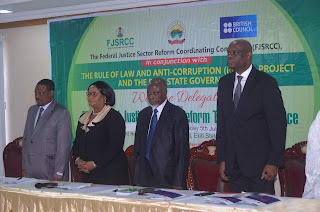 Delegates from participating States in the Federation who are Members of the Federal Justice Reform Coordinating Committees (FJSRCC) have been received by the Ekiti State Ministry of Justice for the Network of Justice Sector Reform Teams Conference.

This Conference scheduled to hold between 1st -5th July 2019 started yesterday with the arrival of Delegates.

The Solicitor General and Permanent Secretary of the Federation, Dayo Apata Esq. who was represented by a Director from the Federal Ministry of Justice, Maria Austin in his opening remarks, thanked the Governor of Ekiti State, Dr Kayode Fayemi for agreeing to host the Conference.

The Governor who is the Special Guest of Honor at the opening ceremony today, Tuesday, July 2, 2019 was represented by the Attorney-General and Commissioner for Justice of Ekiti State, Olawale Fapohunda.

Giving the opening remarks on behalf of the Governor, Fapohunda welcomed the Delegates to Ekiti State, the Land of Honor, while thanking them for coming, assured them of maximum security and hospitality during their stay in Ekiti State.

He announced to the Delegates that, "just last week, Ekiti State Government inaugurated the Justice Sector Reform Team to join other States of the Federation".

The Attorney-General however used the platform to highlight some of the steps taken by the State Government through the Ministry of Justice, in achieving effective administration of justice in the State before declaring the Conference open.