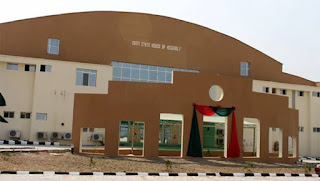 The leader of Ekiti State House of Assembly, Chief Gboyega Aribisogan has made it clear that the speaker of the sixth Assembly, Rt Hon Funminiyi Afuye is an excomplary leader that must be celebrated and supported so as to have a successful achievements.

Earlier, the deputy speaker, Hon Akeem Mojeed led his colleagues on solidarity to congratulate and felicitate with the speaker with a birthday card dully signed by all the 25 members wishing him many happy returns.

In a response to a question to the leader of the house on the assumption particularly from a section of the society that since the 26 house members are from the All Progressive Party that they will be rubber stamped. Aribisogan reacts "well, I have stopped talking about this but since it has become a lexicon in the parliamentary coinage, I believe it is like copying your name and placing it.

When the legislative is having a relationship which is beneficial to the people with the executive, people especially the opposition terms it rubber stamp.

Aribisogan who is a media practitioner and publisher of long repute bore his mind on the welfare scheme for journalists in the state that the Fayemi led government in Ekiti state is media friendly considering his pedigree would always support such having it that journalists must be protected at all times.

The birthday boy who couldn't hide his joy thanked the well-wishes. 'I give thank to almighty God for making today a reality. When asked how he feels at 63? 'I feel great, excellent and I give all glory to the creator and the finisher of life '.

The wife of the speaker, Mrs Afuye couldn't hide her excitement clearly expressed through her constant praises to God. Dignitaries at the occasion include virtually all the EKHA members, the wife of senator representing Ekiti south at the National Assembly, princess Adeyeye, Omotunde Fajuyi and a host of others.