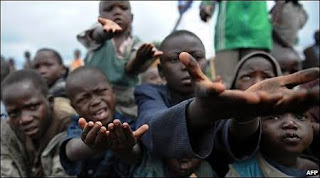 With the adoption and practises of ALMAJIRI SYSTEM in the northern Nigeria, The North may be retarded to spontaneous progressive development experienced and enjoyed in the southern Nigeria.

The Northern aristocrats and capitalist has impoverished and
enslaved the northerners.

They have so enriched themselves through the acquisition of more stupendous wealth at the  expense of social investment and industrialization that will cater for their people.
You keep wondering. Why is the BUREAU DE CHANGE has been solely engaged by the Northern extractions.

Past and present northern leaders had engulfed  both the political space which derived to them the economic power and wealth.

They created the social decadence in the north through the encouragement of the Almajiri system of alms begging practises for the northerners to remain perpetually impoverished, so they may eat from their crumbs.

They intentionality keep the massive body of the people untrained, unskilled, uneducated to retain them as servitude, a deliberate action, for the possibility of both social and religious indoctrination and manipulation of their selfish elites.

The consequences of which led to ethno religious affiliation banditry, terrorism, kidnapping.

The Northern leaders are self serving for coming out to claim their backward, when they are part of the problem.

Their leaders has acquired massive wealth through their illegal and  personal acquisition and embezzlement of  national and states funds that ought to have been channelled for the social investment and developmental welfare of the poor.

Poverty and deprivation strives in the North, a ravaging anti-social vampires, deliberately made to be so by their political and religious leaders, who had for so long promoted and advanced their political and business career at the detriment of masses.

Most of these northern leaders has series of business investment Oil and Gas( Crude Oil extraction licences and Oil wells owned by them) monumental palatial houses built and bought in foreign countries and  Abuja and their liquid assets stacked in foreign accounts seriously dropping the developmental progression of the north.

They didn't mind that this trend should stop, for they has been promoting and sustaining this social decadence since time immemorial.
This is the right time, they need to be told the truth, that they should stop the narratives that the north is backward, for they made it so.
You cannot leave an  oppressed, uneducated people without any form of empowerment without ending up as dregs of the society, Imagine a population of 13 million school age children out of school.

Northern elites must be told the truth. For the past, present and their capitalist  has left their people impoverished and  backward in order to advanced their political (power) prowess and personal inordinate capitalist advancement and career.

The northern Nigeria has been in firm control of both the political power and economic opportunities available in this country since independence, either as a political leader or military  president.

These leaders has massively acquired the wealth of this country for their individual and personal opulence over the years, but has deliberately kept their people in a state of debilitating form of  impoverishment.

Thereby left the masses to perpetual poverty and decadence while the great wealth of this country has been in the possession of few greedy, self centered and selfish individuals who has failed to developed their people but keep developing overseas countries from money stolen from our country Nigeria.

In my next episode,  we will list stocks of northern leaders and their investnent in foreign countries.