Fayemi Advocates Law Against Neglect of Projects Initiated By Past Administrations 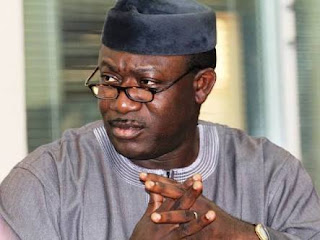 Ekiti State Governor, Dr Kayode Fayemi, has canvassed the enactment of a transition law to prevent succeeding governments from abandoning projects initiated by past administrations.

The Governor said the law was needed to check the wanton abandonment of projects simply because they were not initiated by the incumbent.

Specifically, Governor Fayemi stated that most of the projects he initiated during his first term which impacted positively on the lives of the people were jettisoned by his successor.

He said the law will serve as a guide for any government and stipulate lines of demarcation between what constitutes infractions by way of abandonment of projects and actions that would be of tremendous benefit to the people.

The Governor stated this in Ado-Ekiti on Tuesday, while receiving officials of the Security Exchange Commission (SEC) who were in the state to inspect projects that were financed from the N25 billion bond taken by the state government during his first term.

The first tranche of the bond, put at N20 billion has been fully repaid in line with the structured repayment plan.

Governor Fayemi said he is suggesting that the state House of Assembly should come up with a Transition Law that will state what is expected to happen between the past and new government.

“This is the best way to have a neutral, non partisan approach to governance. The politicians can fight their battle out there, but when the interest of the populace has to be protected, we need to play the right game”.

Fayemi who said that the first tranche of #20 Billion had already been defrayed said the repayment of the remaining #5 Billion would be completed next year in line with the repayment plan.

“There were a lot of hullabaloo and political gimmickry about the N25b bond and that led to the white paper released by the last government to stop me from coming back again as governor. Your coming back for the assessment is very necessary for Ekiti people to get clarifications on how we utilised the money, because what we did was far more than what we took from capital market and you could attest to this having toured some of the project sites”.

Earlier, the leader of the SEC team, Mr. Usman Kawu Mohammed had explained that the visit was to assess the projects and monitor compliance with the rules of the commission.

Usman stated that bond taking is not about an individual but institution, saying the SEC’s assessment was to ensure transparency and probity in governance and prudent utilisation of public funds.

The team visited most of the projects spread across the state in two days.
News