Book Review: Diary Of A Detained Journalist - By Gbade Ademola 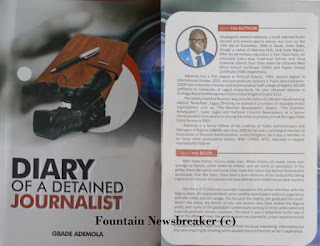 The book which is made of Fifteen chapters in One Hundred and Ninety Two pages with Twenty Eight references is written by Gbade Ademola, an administrator by training and a Journalist by practice. It was forwarded by Sina Odugbemi, a Human Rights Activist, Public Analyst and Critic, who describes it as instructive and engaging.

Diary of a Detained Journalist was first published in 2018 targeting aspiring and practicing journalists and everyone who has an obsession for the journalism profession.

Just like the title suggests, the book tells us about the author's experiences as a practicing journalist during the military government of General Sani Abacha, his rough encounter with Late human rights lawyer, Gani Fawehinmi. He narrated how prominent  journalists in Nigeria were jailed or detained in the name of national security. Journalists like Kunle Ajibade, Chris Anyanwu, Ben Obi were all hounded in the gulag particularly under the inglorious Abacha regime.

In Chapter Four of his book which has the same title with the book, the author narrates his experience in police detention for 32 days. There, he met series of people detained for either being framed up or for offences they never committed.

The book attempts defining journalism profession which covers both print and electronic media.

Gbade talks about how he once 'Yellow Journalism' which landed him in Police Detention for 32 days.

In the chapter two of his book, which centers on yellow journalism, he describes it as an exaggerated, exploitative and sensational reporting.

According to the writer, Yellow Journalism is often used to discredit human and other stories emanating from other newsstand . Yellow journalism is majorly an approach to tell unpopular government mostly, military junta to quit or not wanted.

Though, a means to some of the colleagues to attract or a desire for wealth at all cost.

Several arrests and harassment from one security agents to another were his lots then. He advises journalist not to engage in yellow journalism as it is injurious to the practitioners and the proprietors.

Another thing to look out for in the book is the fifth chapter of this book, ‘Crossing Paths With Gani Fawehinmi’. Gbade also explains that he had such a rough encounter with him in a story he wrote on the purported suspension of Gani Fawehinmi from the NCP which he could not get Gani’s side of the story before going to press which later did not go down well with the legal luminary.

The Author also delves into politics as a journalist who cuts across all sides. In Chapter Nine, through twelve of his book, he talks about ‘Trademark of Nigerian politicians’, he explains that he had an encounter with the late Lamidi Adedibu of Ibadan in Chapter Ten which he calls ‘Godfatherism – My Encounter with Lamidi Adedibu’.

Gbade in the last Chapter of his book which he calls, ‘APC/PDP: Two Sides of the Same Coin, opines that they lack ideas and the dominant cord inbetween them is the quest for position and wealth.

The Author emphasizes that the two political parties only change colour but not interest and this leads to legitimacy crisis in the polity which is dangerous to our hard earned democracy.

On the whole, ’Diary Of A Detained Journalist’ has actually brought forward a media practitioner who started journalism as a campus reporter. The rudiment of the practice, though not professional but inbuilt, trasversed the trend of the profession. One thing that is sacrosanct of this book is that the Author believes so much in the ethics of the fourth estate of the realm despite the hazards faced in the course of the job.

Ademola diggresses into the ethnic nationality and the political dynasty of the Sarakis. His submission on Sarakis would have been left for the public to critically reviewed.

Among the notable and unavoidable missed up or typographical errors is in page 117, paragraph 2 : 'Yoruba protest became violent after the death of the political prisoner, Moshood Abiola who won the 1993 presidential election in 1993 but was subsequently imprisoned by the military government'. The 1993 ought not to have been repeated again since the presidential election was actually conducted in 1993.

The book is well researched going through the references, well tailored and marshalled. The production is okay and of standard with high quality. I hereby recommend this book for practising journalist and those who may find it interesting.