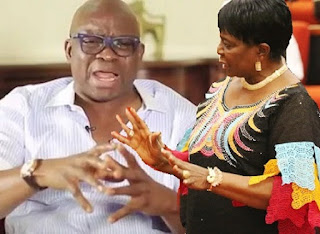 Just as the news is making the round about the Senate minority leader, Senetor Olujimi mocking former governor and People's Democratic Party (PDP) leader Ayo Fayose over the Supreme court judgement that upheld the 2018 Governorship election in Ekiti in favor of Governor Fayemi, a media aide to Fayose, Lere Olayinka and Senator Olujimi have disagreed on this issue.

In a reaction to the news about the mockery, the senate majority was said to have denied the statement from emanating from her as she never did. However, Lere Olayinka in a comment responding to Olujimi's disclaimer said, "the fact remains that, her supporters rejoiced over the Supreme court judgement'.

He went further to tell her to check the Facebook page of one her aides who mocked the former governor over the recent judgment made by the Apex court in favour of the current governor Kayode Fayemi and his party,  All Progressives Congress (APC)

It will be recalled that former governor Ayo Fayose and Senate minority leader, Olujimi were not on the same page during the last National elections which caused a great division in the Peoples' Democratic Party (PDP).

Former governor, Ayo Fayose was also seen in a video clip where he campaigned openly against the candidature of Abiodun Olujimi to return to the senate.
News