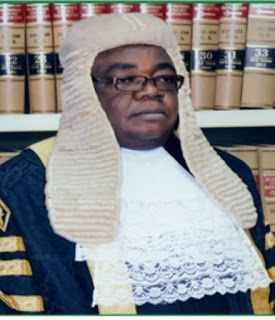 A Justice of the Supreme Court of Nigeria, Honourable Justice Centus Nweze, has charged lawyers who are not skilled in brief writing to strive to gain mastery of the art.

He made this charge on Thursday, May 16, 2019 while speaking at the State Counsel Forum of the Ekiti State Ministry of Justice Academy, held in Ado-Ekiti.

Nweze,  whose presentation was titled "Random thoughts on Effective Brief Writing"  said that "a good brief inevitably attracts, holds and captures the attention and interest of the Judge".

According to the learned justice of the Supreme Court, although oratorial prowess was previously a great assest  in advocacy, but due to the great changes which have been wrought in court rules, proficiency in the presentation of briefs had taken the place of brilliancy in oral advocacy.

Nweze, quoting copiously from the case of Dibiamaka and Ors V Osakwe and ors (1989) 3 NWLR ( pt 107) stressed that unlike in oral advocacy where counsel may be tempted to beat about the bush, a good brief operates like an invaluable navigational aid: a compass which ought to guide counsel’s presentation.

He said, "the new regime of advocacy, therefore, challenges advocates to redefine their grammar: minding the traditional pitfalls in syntax and punctuation, following the rules governing multiple and terminal punctuation, adverbial and adjectival clauses and phrases, and interjections, transition verbs and similar elements".

He however advised lawyers in the Ministry to avoid a brief writing style that was wordy, unclear, pompous and dull.

Fapohunda said that the Academy had developed a curriculum that  was responsive to the career progression of staff of the Ministry.
News