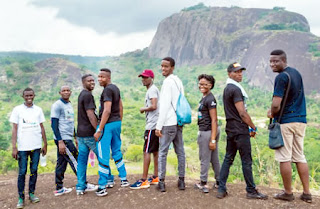 Hike Ekiti Mountain Safari, an innovative idea of a young Ekiti man and some other young Ekiti men like himself is set to hold in April, 2019 in Ekiti State.

Ekiti State derives its name from the moulds and mountains which characterised its topography on which the people planted themselves.

At the creation of states and nations which make up Nigeria, the people who are found in pockets of settlements on the hills, mountain and moulds in the north- western part of the Yoruba land were referred to as the Okiti people. They are the people who planted their settlements on moulds, hills and mountains.

But for effective pronunciation and language enhancement, ‘Okiti’ ‘Ekiti’ as we now have the it.

Characteristics of this geographical location include climatic effects and the vagaries of the element like rainfall, light sun, cloud, and cool bearing wind with harmattan which bites harder in Ekiti particularly in Oye – Ekiti.

Since the creation of Ekiti State, even in the annals of Ekiti history, there has never been an attempt at exploring the geographical location of Ekiti into a worthwhile economic venture except when there is intertown hunting expedition on the mountains,  and hills and moulds.

However, the conducive business thriving atmosphere in Ekiti State engineered by Governor Kayode Fayemi and his interest in tourism has rekindled the urge by the indigenes of the state and non–indigenes too at enhancing the tourism potentialities of the state.

Tourism investors, cultural entertainment enhancers, and professional tourism package hosting concerns who have seen Ekiti as a paragon of tourism now have the confidence of turning their dreams of Ekiti tourism into realities.

Thus, Hike Ekiti Mountain Safari, an organisation being propelled by Michael Peculiar, has set Monday, 22 April (Easter Monday), as the day of hosting the first ever Mountain Safari in Ekiti State.

According to Peculiar “Being a mountain safari buff and patron with copious experience in Morroco, Dubai and Yobe State, I have come to the realisation that Ekiti is the home of mountain safari.

I have this  on my own when I first took a tour of Ofin Mountain – Ado Ekiti and walked the ridges of Efon Alaye – Ido – Ile – Ido Ajinare – Erio,  falling in love with the praying ground on top of the hills, the flora and fauna, the panoramic views the birds, and the cluster of the forest. I then decided that this year, Ekiti must hold its first  ever mountain safari trek in Easter.”

He disclosed that “we decided to hold it on Easter Monday, which has festival coloration with the Christian sect and Jesus Christ. It is a stylistic opportunity of holding the Easter Monday picnic while walking and trekking on the hills of Ekiti thus having the single honour and opportunity of gaining and enjoying the panoramic view of Ado and Iyin Ekiti from the top of the mountain.

It will afford participants the opportunity to romance the serenity of the forest, the lush green vegetation, the flora and fauna and consume the pure breath from the  plants while listening to the rants of the ants, the shrieks of the birds and the jumping of the toads across the pathways”

Peculiar added: “We are kicking off from Ado–Ekiti and head for Iyin Ekiti.

It is going to be an interesting adventure which will not only showcase Ekiti State as mountain safari tourism destination, but a State with the best geographical template for  mountain for hiking “

He revealed: “We are being stimulated and encouraged by the tourism posture and inclination of Dr Kayode Fayemi, who has created and magnified the tourism atmosphere of Ekiti.

This is our own little way of helping to call attention to this state and attracting tourists and visitors who will come to spend part of their earnings here.

Dr Fayemi is restoring Ekiti values in all ways and this is one of the ways of enhancing the glory of Ekiti State. Join us”.
Entertainment News Sport