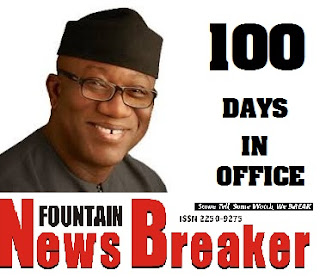 THIS IS A PUBLIC OPINION POLL!!! DROP YOUR OPINION IN THE COMMENT BOX BELLOW, THANKS.

The Kayode Fayemi administration will be 100 days in office tomorrow, Thursday, January 24th, 2019 and there have been various activities lined up to mark this day.

Tomorrow, the governor will be flagging off the New Iyin Road and the launching of the Youth Empowerment program, to commiserate his 100 days in office.
This shows that the government of Dr John Kayode Fayemi is actually ready to work and restore the values of Ekiti people.

However, it is Germaine to know how the people feel, by sampling their opinions on the achievements of the governor so far, since he was sworn in on the 16th of October, 2018.

Below are some of his major achievements during his 100 days in office.

100 Days In Office: Achievements of the Dr John Kayode Fayemi's Administration so far...

1.  Tour and proposed renovation of key projects sites across the state which were scandalously abandoned by his predecessor .

Among which were: Multi billion naira Ikogosi Resort and the Ire-Ekiti Burnt Bricks Industry that were abandoned by the previous administration.

2. Prompt Payment of Workers' Salaries and pensions of retirees. It's very important to note that, Fayemi had paid four months salaries within three months of his assumption of office.

3. Restoration of the payment of the West African examinations Council (WAEC) fees for 13,000 final year students in public secondary schools,

4. Purchase of 3,000 Joint Admissions and Matriculation Board (JAMB) forms for Ekiti youths and procurement of 552 laptops for selected secondary schools.

4. Approval of N227 million ( Two Hundred and Twenty Seven million naira) for the registration of about 13,390 SS3 students in public schools who will be writing the May/June West African Senior Secondary Certificate Examination (WASSCE) this year.

5. The governor has released a sum of N146 million for the payment of Rural Teachers Allowance and Core Subjects Allowance to teachers in its employ.

7. Rural Teachers Allowance is paid to teachers who offered to serve in rural communities.

8. Release of N200 million as loan for car and housing to teachers.

9. Payment of the special allowances covers three-month arrears of October, November and December 2018.

10. Flag-off of a $56million Ero Dam turnaround project with an assurance to meeting 85 percent water needs of the people of the state.

Above are some of the major achievements of the governor in just 100 days in  office, what are your opinions about all these?

What are your words for the government of Dr John Kayode Fayemi ?