Vote Back APC For more Goodies - Osinbajo...Launches TraderMoni in Ekiti 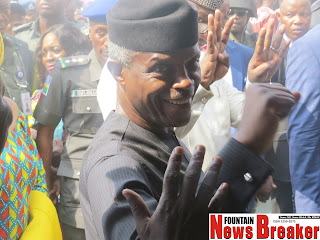 Nigeria's Vice President, Professor Yemi Osinbajo,  has urged the people of Ekiti State to vote back to power, the All Progressives' Congress (APC) to enjoy more goodies from the Buhari/Osinbajo Led government and also launched MSME's and TraderMoni, a component of the National Social Investment Programme (NSIP), in Ado-Ekiti , the Ekiti State capital, promising the Federal Government’s unwavering support for micro businesses across the country. 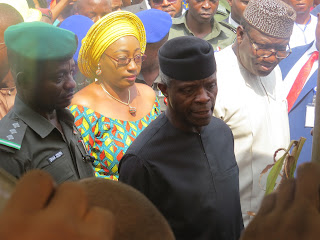 The Vice President, accompanied by Ekiti State Governor, Mr. Kayode Fayemi and members of the state Executive Council at the launch, assured market men and women in Oja Oba Market, Ado Ekiti, Ikere Ekiti and Omuo Ekiti  that traders would receive the sum of N10,000 as a start-up capital, which is an initiative of the Federal Government through the Bank of Industry (BOI) and Government Enterprise Empowerment Programme (GEEP) to fund micro businesses in the country.
Osinbajo, who was received by the jubilant crowd in all the markets visited; populated by traders who gathered from across the state, said the initiative is part of the Federal Government’s Social Investment Programme to boost the funding of micro and small-scale businesses and commercial activities. 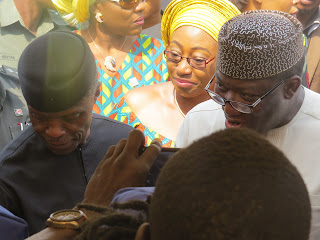 He said the sum of N10,000 which is to be repaid in six months is targeted at small-scale business enterprises, market women and artisans. According to him, the beneficiaries are expected to meet up repayment deadline to enable them qualify for the next tranche ranging from N15,000 to N20,000. Assuring beneficiaries of more incentives for Micro, Small and Medium Enterprises (MSMEs).  Governor Kayode Fayemi said his administration would continue to work closely with the Federal Government on the several empowerment initiatives designed to enhance the welfare of Nigerians.

The governor urged market men and women to take advantage of the funding window to scale their businesses and improve their welfare, noting that the scheme has come to stay in Ekiti State.
One of the beneficiaries, Mrs Bimbo Ojo, in an interview, expressed confidence in the administration of President Muhammadu Buhari, adding that the initiative, which was a rare privilege to petty traders, would go a long way to ameliorate the suffering of the downtrodden. She urged the Federal Government to sustain the scheme when President is voted into office come next election. 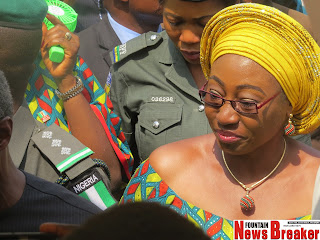 Earlier, Governor Kayode Fayemi, His Wife, and members of the state Executive Council received the Vice President at the Christ School, Ado Ekiti. Prof. Osinbajo, who is on a one-day working visit to the state, also make a stop at Iworoko Ekiti where he commiserate with the victims of the accident that claimed lives in the town promising to assist the state government to avert such occurrences in the future.
He however visited the Ekiti Parapo Pavilion, where he was received by mammoth crowd, who among were: party loyalists, entrepreneurs and well wishers.
News