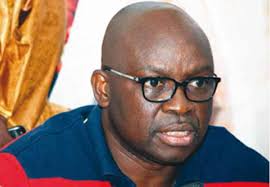 The Senior Special Assistant to Ekiti State Governor on Public Communications, Segun Dipe, has described the immediate past governor of the State, Mr. Ayodele Fayose, as someone suffering from a personality disorder, which is narcissistic in nature, and which makes him have an inflated sense of self-importance.

Dipe was reacting to Fayose’s criticism of the Federal Government’s Trader Moni programme, which the latter ignorantly described as "an avenue for advanced votes buying, and direct re-looting of the Abacha loots." Fayose however failed to explain how the programme could amount to “re-looting of Abacha’s loots.”

According to Dipe, Fayose was being deliberately mischievous as usual and had failed to realise the fact that his political music had since stopped playing, yet he kept dancing like a mad man in the market to no music.

Trader Moni, Dipe said, “is an interest-free loan programme of the federal government as an enterprise and empowerment programme scheme was created since June 2018 specifically for traders and artisans. The social investment programme was set up in June 2018, approved by the National Assembly long before President Muhammad Buhari became the Presidential candidate of the APC or the party flagged off its campaign and is being implemented by both the federal government and the Bank of Industry.”

“It is rather absurd for Fayose to view Trader Moni as a vote-buying mechanism,” Dipe said, adding that the programme had already been carried out in 33 states, with Ekiti, where Fayose branded himself as friend of the masses, and two other states waiting to benefit. This is the same Fayose, who, as a governor also denied his state from benefitting from the school feeding programme, despite its wide acceptance and benefit to learning.

"Not only is the Trader Moni, a properly conceived project, it is accepted, appreciated and much celebrated by the beneficiaries who see the money being loaned them uncollateralized by the federal government as a timely and positive intervention in their businesses."

Dipe however advised all discerning minds to disregard anything coming from Fayose’s camp. “It is sad that those who ruined the past are the same people now pontificating on how to reconstruct the future. Fayose can no longer be trusted anywhere. He is not only out of power, but out of relevance. Like a fish out of water, he is gasping for breath and finding it impossible to survive out of power while looking for every and any straw to hang on for relevance," he said.

“Even within his party, the People’s Democratic Party (PDP), Fayose is now being treated like a leper. Imagine him, a once-upon-a-time gadfly in PDP, now running helter-skelter, begging to be given a role to play, no matter how small, in the campaign of his party’s Presidential candidate. We can now see why he is doing the unsolicited punditry to no particular audience.”

The governor’s aide however advised the people of Ekiti State in particular, and Nigeria in general, to steer clear of Fayose and his goons, who would be doing everything to worm themselves back to relevance. This, he said, they would be doing by finding faults where there is none, and trying to discredit the good intentions of the incumbent administration of Dr. Fayemi in Ekiti.

Dipe noted that while the incumbent Governor of the State, Dr. John Kayode Fayemi, is doing everything to restore the values of the state and shift the attention of the people of Ekiti away from the dark days of his predecessor, Fayose on the other hand is trying hard to keep those dark days in their consciousness, by taking his mouth to where his brain has refused to go.
News