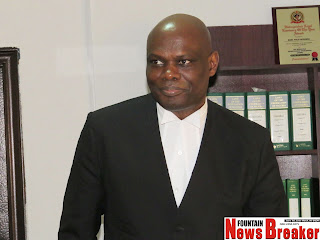 By
Abasi Femi Oguntayo
Below is a Presentation by the Ministry of Justice in Commemoration of 100 Days of Fayemi's Administration. Released by the Special Assistant to the Attorney-General on Public Education, Media and Communication, Tunde Olaolorun Esq.

1) About the Ministry of Justice:

The mission statement and purpose of the Ministry of Justice {MOJ} is to administer justice in Ekiti State and to oversee state legal and legislative services.

Mr. Governor identified four key deliverables for the MOJ for the period 2018 – 2022.These are:

a) Provision of fair and equal access to justice for all in Ekiti State, regardless of their ethnic group, gender, marital status, age, economic status, disability, religion, belief, culture, language or any other attribute.

b) Ensure justice processes that are fast, effective, cheap and sensitive to the needs of all users, and understandable to all users.

c) Provide legal services to the government that are efficient and cost effective.

d) Be able to gain the confidence of the government and public in the administration of justice.

2. Key Activities of the Ministry during the Reporting Period

The MOJ drafted the following Laws during the reporting period:

Executive Order No. 001 of 2018.
This Executive Order gave full effect to the reversal of universal levies in primary and secondary schools in Ekiti State;

Executive Order No. 002 of 2018.
This is an Executive Order on the establishment of a fact-finding Committee on the Broadcasting Service of Ekiti State (BSES);

Executive Order No. 004 of 2018.
This is an Executive Order on the establishment of visitation panel for the Ekiti State College of Education, Ikere Ekiti;

Executive Order No. 005 of 2018.
This is an Executive Order on the establishment of visitation panel for the College of Health Sciences and Technology, Ijero Ekiti.

a) Ministry of Justice Activity Plan: The State Executive Council   approved a 12 (twelve)-month activity plan for the MOJ. The plan highlights specific activities that will be undertaken by the MOJ to achieve the key deliverables identified by Mr. Governor.

c) Appointment of Legal Advisers to MDAs: 37 Legal Advisers were designated to MDAs in furtherance of the committed of MOJ to provide cost effective and professional legal services to the government and people of Ekiti State. The mandate of the Legal Advisers is to provide legal advise and where necessary representation to the MDAs in all matters in which the State Government is a party.

d)  Law Officers Security Protection Service: The  MOJ established a Law officers Security  Unit within the office of the Solicitor- General & Permanent Secretary to enhance the safe and secure conduct  of judicial proceedings  by protecting law officers within and outside court houses. This will be a collaborative efforts with security agencies to be accomplished by anticipating  and deterring threats to Law Officers.

IV) Professional Development
Establishment of the Ministry of Justice Academy: The State Executive Council approved the establishment of the Ministry of Justice Academy within the reporting period. This is the first in Nigeria. The purpose of the academy is to facilitate the professional development of Law Officers and  administrative staff in the MOJ. The Academy will facilitate training programmes and seminars on topics that are relevant to the administration of justice in Ekiti State.

The Office of the Attorney-General commenced the renovation of the MOJ office complex. This includes painting and repair works in most parts of the Complex.

In response to the absence of electricity in the MOJ, a 60 KVA generator was purchased to further enable a confortable working environment for staff of the MOJ.

The State Executive Council also approved the sum of Six Hundred Million Naira for the construction of a new office complex for the Ministry.