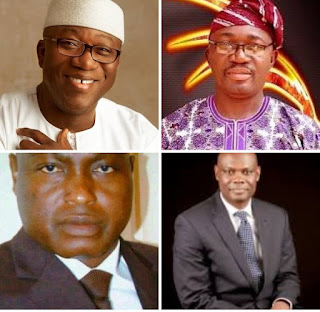 End of the year STRAY BULLET By Tai Oguntayo
Fountain Newsbreaker
...A Must Read Column

Every government all over the world usually has what is tagged the kitchen cabinet which usually conceptualizes the leader's thoughts before being nurtured into fruition. This kitchen cabinet may be part of a formally constituted cabinet or a clandestine one. What's important in the group is that, most times, it is sine qua non to the success of the administration or vice versa.

In the last two and a half months of Dr John Kayode Fayemi's administration in Ekiti State, I've discovered the existence of the three musketeers who I was tempted to call, The Three Wise Men at the risk of sounding patronizing.  These three gentlemen have many things in common to the extent of their birthdays and loyalty. I'm talking of no other persons than the Secretary to the State Government, Abiodun Oyebanji, the Chief of Staff, Abiodun Omoleye and the Attorney General, Abiodun Olawale Fapohunda. Agree or disagree with me, something binds the trio together and it's loyalty. This endears them to the heart of their Principal and bequeaths on them the privilege to stand tall in this government.

This is not to say that they are the only loyal aides of the governor as we have other notable aides like the Finance Commissioner, Dapo Kolawole and the Director General of Government Procurement in person of Seun Odewale aka Egghead. However, the trio earlier mentioned share a lot of things in common up to the extent of being born in the month of our Lord Jesus Christ. No wonder, JKF's administration has been methodological and  free of internal rancour going to three months.

I can conveniently compare the trio of Abiodun Adebanji, Abiodun Omoleye and Olawale Fapohunda with the doyens of Nigerian journalism namely; Olusegun Osoba, Felix Adenaike and the late Peter Ajayi who took the fourth estate of the realm to another level during their times.

At the presentation of a book, The Three Musketeers written by Sani Agboola, the Alaafin of Oyo, Oba Lamidi Adeyemi said though the trio of Segun Osoba, Felix Adenaike and Peter Ajayi "may not be biological brothers but competence, excellence and professional integrity binds them together." That was the paramount ruler in Yorubaland talking of the three pacesetters in Nigerian journalism who shared their lives and times together at the then Daily Times, the Daily Sketch and the Nigerian Tribune.

Now, talking about our own Three Musketeers in Ekiti politics, I carefully examined their lives and discovered that irrespective of whatever shortcomings each of them may have as mortals, their loyalty, steadfastness and cool-headedness are worthy of emulation.

To start with, my relationship with Mr Abiodun Oyebanji was dated to 1996 when Ekiti State was about to be created. He was working as a lecturer at the then Ondo State University, OSUA while I was working as a Senior Reporter at the Nigerian Tribune. He was so close to Dr Kunle Olajide that whatever the Efon Alaaye born medical doctor wanted out in the Nigerian Tribune, Abbey (as I used to call him) would bring it to me. From there we became close and he introduced me to Otunba Akin Oluwadare who later became Chairman of Ekiti West Local Government under whom I served as the Supervisor for Health. The three of us were supporting Dr Kunle Olajide's Governorship ambition under the then United Nigerian Congress Party (UNCP) but when that political transition was truncated and new parties emerged, we were together in the Alliance for Democracy (AD) where we teamed up with Otunba Niyi Adebayo when it was apparent the political calculation then did not favour Dr Kunle Olajide. Our group then started as Ekiti West Front and later became Ekiti Front. In that government, Mr Oyebanji served as the Special Assistant on Parliamentary Affairs (SAPA) as a political scientist and later he became the Personal Assistant to Otunba Niyi Adebayo, a position he conscientiously held till his present appointment as the Secretary to the State Government. As a mark of loyalty, even after serving as a Commissioner under the first administration of Dr Kayode Fayemi, he returned to continue as the PA to the first executive governor of Ekiti State. In his Ikogosi hometown, Mr Oyebanji has been a factor to reckon with, determining who gets what, where, when and how in the last 20 years, taking after the Olu Amiguns of the warm water spring town.


In the case of Abiodun Omoleye, the ever reticent politician, we came closer for the first time on the day of my installation as the Akogun Aafin of Ipole Iloro in November, 2001. He had come with his boss, the then Commissioner for Justice & Attorney General, Mr Babafemi Adewale whom he served as Personal Assistant. It wasn't a little surprise to Mr Omoleye 12 years later when I showed him the picture we took together at Ipole Iloro having him, Obafemi Adewale, my wife and myself! This consummate Ijurin Ekiti born Administrator later served as the Chairman of Ijero Local Government while I was Special Assistant to the Governor and he later came to serve as the Special Adviser to the Governor while I moved to Ekiti West to serve as the Secretary to the Local Government. He is highly dedicated to service and loyal to the course of his Principal, Dr John Kayode Fayemi. Unlike many politicians who can talk out their heads, Abiodun Omoleye, just like Abiodun Oyebanji and Wale Fapohjnda, hardly talks even though many thoughts flow in their minds like the famous River Niger. Today, as the Chief of Staff, he has been an all-round stabilizer having served at both Local and State government levels before his present appointment.

Now to talk of our own Olawale Fapohunda who is also Abiodun even though he's usually silent about that name. To say that my relationship with his family was over two and half decades is to repeat the obvious to those who  really know his late father, Prince Olusola Fapohunda in Okemesi Ekiti. My first major election into public life aside student unionism was at the instance of Prince Olusola Fapohunda, who was also a Commissioner in two ministries consecutively in the old Ondo State. Precisely on December 26, 1995 Prince Fapohunda (Snr) was re-elected as the National President of the Federation of Okemesi Improvement Union (FOIU) and I emerged the National Publicity Secretary, a position I held for five years when the town was at a critical period. Therefore, when Dr Kayode Fayemi discovered Wale Fapohunda and brought him to his government in 2013 during the turbulent period Action Congress of Nigeria (as our party was then) in Okemesi-Ekiti, I knew he was actually coming in to perform a surgical operation which in deed he did and still doing both in the leadership of the party in Okemesi and in the Ministry of Justice where he was posted to head. Wale Fapohunda broke the jinx of losing many cases as it was under his watch that Governor Fayemi won the Supreme court case instituted by Engr Segun Oni apart from other cases which he won for the State without much ado.


As a focussed leader, though Wale won't consider himself a politician, he successfully brought all the factions within the APC in Okemesi together, a feat which the leaders before him couldn't achieve. This was made possible because of his impartiality among the dramatis personae, his generosity and humility. Today, everybody assembles in his house as he sets the pace without any rancour.  It is to his credit that for the first time, House of Assembly primary consensus agreement was done in Okemesi without any rancorous and faulty primary election that usually characterized the exercise in the past.

One can now imagine what to expect in a government where these three gentlemen call the shots. If they can all handle their home fronts peacefully without any brouhaha, definitely they won't constitute themselves into nuisance in the administration of Governor Kayode Fayemi.

Abiodun Oyebanji was born on December 23rd, Abiodun Omoleye and Abiodun Olawale Fapohunda were born on December 25. So, they are no  doubt, a trio of a kind! The Three Musketeers of Ekiti politics! Symbol of loyalty and consistency!

Tai Oguntayo, a former chairman of the Nigeria Union of Journalists in Ekiti is the current chairman of Association of Nigerian Authors in Ekiti and the Publisher/EIC of Fountain Newsbreaker.
Entertainment News