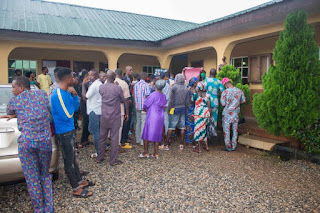 The people of Orin Odo-Ekiti in Ikole Local Government, has urged the Ekiti State government not to recognize Oba Adebisi Ogunjobi as the
traditional ruler of the community.

They accused former Governor Ayo Fayose of unilaterally imposing
Ogunjobi as the Olorin without traditional rites performed on him and
without following due process.

Led by the Regent of Orin Odo, Princess Oluwakemi Ogundana-Ajisafe, the community during a courtesy visit to the Deputy Governor, Otunba Bisi Egbeyemi, on Tuesday, urged the state government to stop Ogunjobi from parading himself as the Olorin for peace to reign.

Describing the way and manner Fayose allegedly imposed his preferred
candidate on the community as “bizarre, unconventional and strange to tradition,” Princess Ogundana-Ajisafe said the development the
kingmakers and other stakeholders were not carried along.

She alleged that the former governor ordered that the two candidates
contesting for the royal stool be blindfolded and also ordered chiefs
to line up behind their choice as king.

The regent regretted that the former governor allegedly used soldiers
and other security agents to harass chiefs and community leaders in a
bid to impose his preferred candidate as monarch.

Besides, the Regent told the Deputy Governor that the official FORD
car used by his father and immediate past Olorin of Orin Odo, Oba
William Abiodun Ajisafe, was taken away from her at gunpoint by agents
of the former governor.

The Regent explained that she duly sought Fayose’s permission before travelling to the United States in 2015 after succeeding her father after which the community was invaded on the alleged order of former governor with many of the chiefs arrested.

She said: “Fayose wanted to use my father’s staff of office to install his preferred person as the Olorin but it is the name of my father that is inscribed on the staff of office.

“No traditional rite was performed on Ogunjobi by those charged with
the responsibility hence he cannot claim to be the Olorin.

“We want to state government to help us to stop him from parading
himself as the Olorin because there is a process to be fulfilled
before somebody can become a king and we want peace in our town.”

Responding, Egbeyemi urged the aggrieved people of Orin Odo to give peace a chance advising them to go to court to challenge the process that threw up Ogunjobi as monarch.

Egbeyemi said: “I am a lawyer of almost forty years in practice. The
best thing you can do is to go to court because I don’t want to deceive you on the matter on ground.

“My office cannot depose any Oba, the only place you can go to resolve the matter is the court of law.”
Entertainment News