Leave Buhari Out Of Your Woes, Group Warns Atiku, PDP 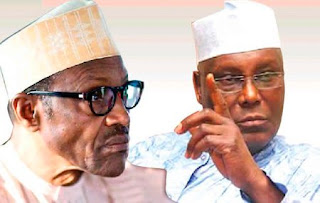 As more reactions trail the former Vice President of Nigeria, Alhaji Atiku Abubakar's United States immigration status, a pro-Buhari group, Coalition of Buhari/Osinbajo Movement (COBOM) has warned him and his political party, against bringing in President Muhammadu Buhari into his misfortunes.

A statement signed by the group’s Chief Political Specialist, Olalekan Adigun today in Lagos described the People's Democratic Party's candidate as facing “woes of corruption symbolised by the PDP as a party and Atiku, its candidate."

It will be recalled that the former Vice President was reported to have been granted visa by the United States Embassy in Nigeria after 13 years of entry denial over corruption issues. A US Congressman, Jefferson is currently serving a jail term in connection with this corruption charge.

The statement further reads in part: “We find it really disgraceful that the PDP admitted there was a visa ‘ban’ on its candidate only to turn around and blame his woes on Buhari? How does that add up really? Has the party and overstaffed Atiku’s campaign run out of ideas?  What has Buhari got to do with it?”

Mr Adigun further said if it was true, as his supporters claimed that he had no corruption issue(s) in the US, then he should not have been afraid of traveling to the country. “The drama witnessed over the weekend when Atiku reportedly travelled to the United Kingdom to secure assurances from the US Justice Department that he would not be arrested shows that he and his supporters are indeed deluded. They must have thought his buying of the PDP presidential ticket automatically confers diplomatic immunity on Atiku” he said.

Going down the memory lane, Adigun cited “when the loquacious  Ekiti State Governor, Mr Ayo Fayose accused the President’s Wife, Mrs Aishat Buhari of being involved in a fictitious Halliburton scandal and that she could not enter the United States sometimes in 2016, Mrs Buhari did not make issues of it. She responded like every sane person should by travelling to Washington before that year ran out. This effectively put an end to the madness".

He then challenged Atiku to follow this same part by entering the US through the Mexican border and take few pictures in order to prove that he is not a wanted criminal” The statement urged.