Funke Akindele Disgraces Prophet As She Gives Birth To Twins 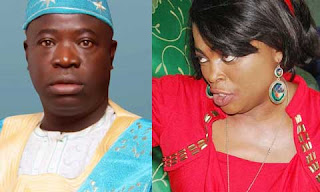 Actress Funke Akindele has put to shame the prophecies of a prophet who said she can never have children as she has finally given birth a set of twins over the weekend.

It could be recalled that a Lagos-based prophet, Olagorioye Faleyimu two years ago stated that the actress would have to undergo serious prayers before she could have children.

Faleyimu prophesied, “A popular actress in Nollywood, Funke Akindele, who was once in the Yoruba movie industry should pray deeply so as to have children.

“Another grace she has is to marry a pastor who can fight the battle on her behalf with prayers.”

Last year, he insisted on his words despite the series of attacks he received. According to him, he was only advising Funke Akindele to draw nearer to God in order for her to have children.

He said, “Yes, it’s God that revealed to me that she’s destined to be famous and wealthy but no child, but if she’s very prayerful, she will eventually break the yoke of barrenness and become a mother.

“That same message has also been repeated. Even, if she doesn’t seek the face of God, her enemies don’t want her to have a stable home despite the fact that she has remarried. That means the marriage can still crash unless she’s prayerful.

“God has also repeated it this year, that for her to have a child, she needs to be closer to God. People are now attacking me here and there that why did I say that?

“Some said I should have written a letter to her or invited her privately instead of making it public. But I am not a kind of prophet that predicts because of money. I am an anointed prophet. My calling is to deliver message as sent by God.

“But some people don’t know the difference between prophets and anointed ones. It’s in the Bible and Qur’an how the prophets of God operate. They’re not prophets of nowadays that only came to collect money from the government, high and mighty in the society and others.

“As a prophet, deliver God’s message and move on. You don’t need to be on anybody’s neck.

“I read in one of these Yoruba magazines that Funke Akindele is waging spiritual war against me because of the prophecy; nothing can happen unless God didn’t send me.

“I don’t regret on what I said. All she needs is to pray very well, I have nothing against her. I am 40 years as a prophet. That means I have been predicting since 40 years ago and I have never regretted any of my prophecies.

“I am used to all these criticisms about my prophecies. Even, at times, some would curse me but at the end of it all, all I said will come to pass".
Entertainment News