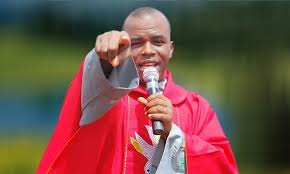 It was a melodrama last Sunday at the Adoration Ministry, Catholic church in Enugu Nigeria as the Spiritual Director of the Church,  Rev. Fr. Ejike Mbaka scolded the Vice Presidential Candidate of the Peoples Democratic Party, Mr Peter Obi right before the alter in the presence of His wife.

The fiery clerichad during a Sunday thanksgiving service predicted doom’s day for the flag bearers of the PDP, Atiku and Obi saying “if you continue the way you are going with Atiku (Abubakar) you will both end in shame.”

The Catholic priest who berated Atiku’s running mate, Peter Obi for not doing anything for the church, warned him of the consequences of being stingy. He therefore refused to pray for Obi until he decided to do a project for them.

Using Umahi as an example, Mbaka said: “Umahi donated 1,000 bags of rice and 1,000 tubers of yam to us, but it meant nothing to me until he handed N10 million cheque to me and promised to build a project for the ministry. This is the type of gesture we require from Obi.

“You can be promising and doing for them in Anambra. In your capacity and what God has done for you as governor, God hates stinginess. What I am saying is not to please you, but what will save your life.

“Governors of Ebonyi and Enugu made donations without announcing at the altar, your own is taking time, the way you and Atiku are moving will end in shame.”

The former Minister condemned the cleric over his latest prediction on the presidential candidate the Peoples Democratic Party, PDP, Atiku Abubakar and his running mate, Peter Obi in 2019 election describing his actions as "disgraceful". He then urged Catholic Church to call him to order.

Fani Kayode on his Twitter page wrote: “I am disgusted by the words of Father Mbaka. It does not matter to me which candidate he supports but what galls me is his begging for money from both sides in return for favourable prophesies.

“This is disgraceful and his superiors in the Catholic Church should call him to order.”
News