Ekiti Workers to Smile at Yuletide As Fayemi Gets N3.9b Paris Club Refund 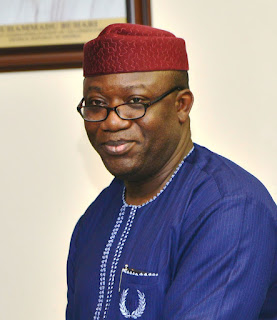 
Ekiti State Governor has said that the 3.9 billion Naira Paris Club refund Ekiti got will be used to clear the backlog of salaries owed by the previous administration.
According to a press release signed by the Chief Press Secretary to the governor, Yinka Oyebode, the state government on Thursday received N3.9 billion from the Federal Government as the last tranche of its Paris Club refund.

As directed by the President, N3.3billion was also deducted and paid as outstanding 2016- 2018 counterpart fund for Universal Basic Education Commission (UBEC) being owed by the state.

Consequently, the State Governor, Dr Kayode Fayemi, had directed that the N3.9 billion Paris Club refund be applied to pay one month of outstanding arrears to state and local government workers, teachers and pensioners, in line with his promise to Ekiti workers and people.
This will be done with an augmentation from internal savings.

The Paris Club refund was received following President Mohammadu Buhari’s intervention in the matter, after Governor Fayemi’s last week visit to the President.

Governor Fayemi expressed appreciation to the President for the timely intervention, having assured workers in the state that his administration would explore all avenues to clear the five to eight months salary arrears owed workers in the state by the immediate past administration, within a reasonable period.
Dr Fayemi, had while fielding questions during the monthly “Meet Your Governor” programme on television and radio last week re-assured workers that he was yet to receive the Paris Club refund, adding that he would make it public once the state received the payment.

The immediate past administration of Mr Ayodele Fayose had received a total N18.34 billion Paris Club refund in three tranches between December 2016 and December 2017, in addition to bailout funds, budget support funds and excess crude support, all totalling about N55 billion, but failed to utilise it on salary being owed workers and retirees.

The first tranche of the Paris Club refund totalling N8.87 billion was received in December 2016. The state also got N4.77 billion in July 2017 and another N4.7billion in December 2017.
Governor Fayemi however assured workers in the state that his administration will not owe them salaries, adding that he would clear outstanding salaries for all categories of workers within one year.
News