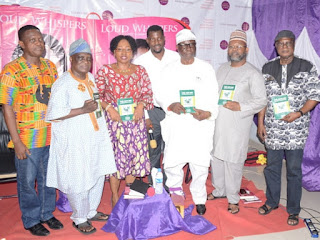 The wife of the Governor of Ekiti State, Erelu Bisi Adeleye Fayemi has warned all male lecturers of tertiary institutions who are in the habit of harassing female students to "park well" as anyone caught will not be spared.

Speaking at the special monthly reading program of the Association of Nigerian Authors (ANA), Ekiti state chapter as a Guest Reader at De Jewel's Apartments in Ado Ekiti yesterday, Erelu Bisi Fayemi frowned at the dastardly act if "Rape and Beg" describing it as a campus act.  She said Ekiti government under her husband watch had already put in place necessary laws to protect female and child's rights but that the previous government didn't make use of them. She said anyone who abused children or women would not be spared under this government.

Erelu who read from her latest book declared that she got the inspiration to write the book titled: 'LOUD WHISPERS' from her writings on her website: abovewhispers.com.

The ANA State Chairman, Akogun Tai Oguntayo while welcoming her and the Deputy Governor of Ekiti State, Otunba Bisi Egbeyemi, said the Governor's wife had really made Ekiti ANA proud in the comity of ANA chapters. 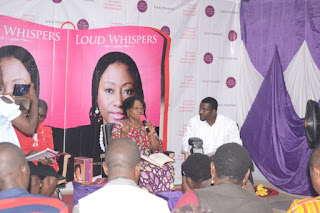 The ANA boss described Erelu Bisi Fayemi as a prolific writer and a synergy between politicians and writers.

Erelu read two chapters from her book, Loud Whispers, which was a collection of her write ups that centered on culture and social media. She was of the opinion that African culture was rich and should not go into extinction. She cited the way our fore fathers named their children in those days with salt, honey, water, bitter collar etc which portend good future for such children but nowadays, such things no longer exist 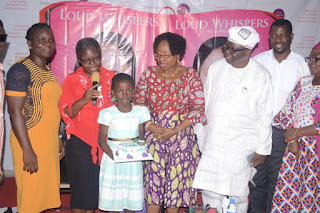 As an African feminist, Erelu was of the opinion that women especially  female children should not be abused or deprived in any form. She opined that "social media has contributed greatly to the society but the other side of it was alarming to the extent that people use it to spread lies, propaganda, make unknown identity, exposing private part, committing crimes and so on."

In his response to the reading, the Deputy Governor of Ekiti State, Chief Bisi Egbeyemi, who was present with his wife, Chief (Mrs) Margret Egveyemi, wanted to know what actually brought Erelu and her husband back home from abroad, whether the shock of the death of their neighbour or the death of General Sani Abacha, the then head of State. Erelu quickly explained that they were tired of the "I don't care attitude" of the white to issue of life and death coupled with "Abacha who did everyone a favour by dying at that period making it easier for people on exile to return home".

The wife of the Secretary to the State Government, Dr Oyebanji, Dr Niyi Akeem amongst other audience asked questions particularly on African culture, activism and gender based activities.

Erelu Bisi Fayemi emphatically stated that she was not opposed to religious way of life but our cultural heritage must be preserved and uplifted for generations yet on born. She didn't mince words that it would not be business as usual for rapist in the state as stiff penalties awaited them. 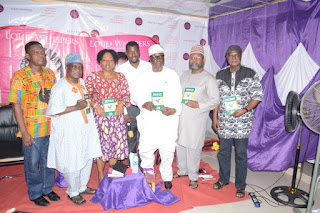 Responding to a question at the event, The state ANA chairman seized the opportunity to do an investiture of Erelu Bisi Fayemi as a member of ANA, Ekiti State.

In their good will messages, Professor Osofisan, Professor Olu Obafemi, Professor Sunny Ododo and a host of others were of the opinion that Erelu Fayemi was a blessing to the state and for her to have found time to write books despite state assignments was commendable. They sounded a strong warning to their colleagues in various higher institutions to be careful in their dealings with female students.

The Deputy Governor, Chief Bisi Egbeyemi however advised the up coming writers to emulate the good virtures of Erelu Fayemi.