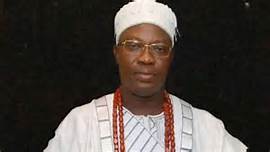 The Olukere of Ikere Ekiti, Oba Ganiyu Ayodele Obasoyin has described the return of Kayode Fayemi as Governor of Ekiti State as divine and historic and pleaded with the State Government to present him instrument of appointment and staff of office.

Oba Obasoyin made the plea while on courtesy visit to the Deputy Governor, Otunba Bisi Egbeyemi in his office.

A statement on Sunday by the Special Assistant (Media) to the Deputy Governor, Odunayo Ogunmola, quotes the Olukere as describing Governor Kayode Fayemi's return to office as "divine and historic."

He urged the people of Ekiti State to support and cooperate with the Fayemi administration to succeed in the task of developing the state and bettering the lots of its people.

According  to him, Fayemi's victory at the last governorship poll and his subsequent inauguration into office alongside Egbeyemi and some policy pronouncements made so far has given hope to Ekiti people.

Obasoyin said the staff of office would give his stool official recognition and the right to sit in the State Council of Obas.

One of the community leaders that accompanied the Olukere, Chief Michael  Shittu and others solicited the State Government's cooperation to gain recognition as a substantial king in Ikere and Ekiti State.

While congratulating Fayemi and his administration on their return to office, Shittu appealed that the wrong of the past allegedly done to Olukere must be corrected.

He said,  he would be grateful if this could be achieved within the administration's first year in office.

Responding Deputy Governor Egbeyemi urged him to channel his case through the appropriate quarters.

He told him and his team to always seek peaceful ways of resolving crisis and live together harmoniously.

Egbeyemi said: "I listened to you and heard your demand. The authority to grant your request rests with the governor.

"It is the governor that has the final say over it but I want to advise that let all of us stand by the truth.

"We must endeavour to stand by the truth because our desire is for peace to reign in Ikere in particular and Ekiti State in general."
News