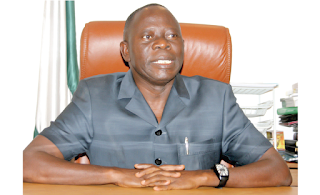 All Progressives Congress (APC) National Chairman Adams Aliyu Oshiomhole has yesterday said that any attempt by former President Olusegun Obasanjo to return to power by proxy will be resisted
He dismissed as “empty” the former leader’s boast that the Peoples Democratic Party (PDP) will unseat the APC-led administration from Aso Rock.

Oshiomhole spoke in Kano where he led other APC stalwarts to receive hundreds of members of the PDP and the Kwankwasiyya Movement, who defected into the ruling party at the Sani Abacha Stadium.

”Obasanjo’s dream to rule Nigeria by proxy will not succeed,” Oshiomhole told the crowd of supporters.

He said: “It is a wonderful day that all the progressives have come together to reinforce power to sustain our democracy. Never again should this country be governed by opportunists.

“President Muhammadu Buhari’s constituency is the army of the poor. We are building a country where those who work will be able to eat, not those who use telephones to make billions without working for it.

“We are waiting for the message and shall respond appropriately to their message. This country must move forward. It does not belong to those who have a history of taking so much out of the system even as they cannot show what they have put into the system.

“We have to fix all the problems; we did not come in to fix them overnight. What they did not do in 16 years cannot possibly be fixed in three and half years. But I believe we have shown the most important quality that we need in a leader – to have a man of honour, a man of integrity, a man that you can trust; and that is President Muhammadu Buhari.

Oshiomhole replied to criticism by the PDP of the electoral process. He said: “Let me also use this opportunity to appeal to our opponents in PDP that they seem to be crying before the election takes place. When they win, everything is perfect; any time they lose, nothing is right. I see them writing a letter to the United Nations (UN) and I’m asking who is going to carry the letter.
“Nigerians will not forget that it was PDP under President Olusegun Obasanjo who introduced what he called do-or-die politics. They remember when he said the election of 2007 was a do-or-die for him.
“Fortunately, we did not die; fortunately, he is still alive. He would be alive to see a country that grows from strength to strength, that is detained by the bitterness of the past.
“But his (Obasanjo) dream to rule by proxy will never succeed. Nigerians can never go back. We must move on. In another mandate for President Buhari, we will witness sustainable growth, development and happiness for the good of the average Nigerian.”
The party chief praised Governor Abdullahi Umar Ganduje for his steadfastness in sustaining the manifesto of the APC, saying: “Thank you so much, Your Excellency. You have made a statement. Politics is not about social media where one man can recruit 2000 young men to just be posting fake stories.
“Politics is on the ground and it is played by real people. When you promised to deliver five million votes I know you will do so because people of Kano State belongs to President Buhari; and President Muhammadu Buhari belongs to the people of Kano State.
“It will interest you to know that during the primary election, President Buhari had 14.6 million Nigerian APC members voting for him freely to nominate him. Compare this to what my dear friend (Goodluck Jonathan) did in PDP in 2014 when they collected signatories to ask a sitting President to re-contest.
”I think we have changed the game, and the game can never be the same again. Nigeria can now grow from strength to strength. I want to ask you (Ganduje) to have faith. We shall be victorious at the end.”
Presenting the defectors to Oshiomhole, Ganduje said: “Today, APC is the greatest party in Nigeria, and in Africa. APC is the only party in Kano State. We have the highest number of party members; our intention is to provide the highest number of votes for APC in Nigeria.
“If you can recall, we promised President Muhammadu Buhari that we will give him over five million votes. Mr. Chairman, we assure you that APC is united in Kano. Kano is the home of progressives.
“The late Malam Aminu Kano was a progressive, the late Sabo Barkin Zuwo was a progressive, and the late Abubakar Rimi was a progressive. Now, what do you expect in Kano – if not a progressive government, a progressive administration, a progressive voting. That is why we are ready to give President Buhari over five million votes.”
Speaking on behalf of the defectors, two-time governor Mallam Ibrahim Shekarau said: “Today is a moment to reckon with history. On behalf of all my supporters, well-wishers far and near who have joined us to move into APC, it is a great pleasure for us to be part of APC.
“I have this great honour to be one of the mid-wives of APC, history is repeating itself. In 2014, we stepped aside, and today, we are coming back to APC. I want to thank the national chairman and Governor Ganduje who have embraced us today.
“We are happy to be part of APC. It is our sincere prayer that God, in His wisdom, come 2019 will grant APC victory from Presidency, governor, senator, House of Representatives and State House of Assembly. Insha Allah, it is going to be a total success.”
News