My Candidature Not for Stray Bullet reason - MOB 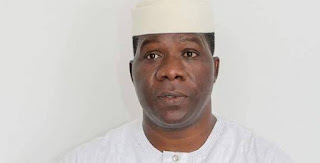 
Former House of Representatives member and  Ekiti Central Senatorial District candidate in the forth coming national Assembly election, Hon Micheal Opeyemi Bamidele, has declared that he is not a senatorial candidate because he was shot by a triggered security personnel  at the state secretariat of the All Progressive Congress on June 1,,2018.

The Ekiti central senatorial district candidate in the forth coming national assembly election on the platform of All progressive congress stated this today on the occasion of the harvest and thanks giving service of the Christ Apostolic Church, Temidire 2,Falana Assembly  Ado Ekiti.

The former commissioner for information and strategy in Lagos State who arrived at the uncompleted Church auditorium at about 1pm with his entourage was full of praises to God almighty when he was called upon to give his thanks giving. He says : l give glory and honor to God for sparing my life till this moment. I left Lagos this morning for Ado Ekiti at about 430 am and on my way, l had an accident but l will continue to thank God almighty because when l was shot in my tigh and abdomen on June 1,2018, He saved me and He Has been saying my life '.

He recalled the event that happened to him at the state secretariat of All progressive congress that it was God that did it. 'I don't go to herbalist or any places to seek for power and protection but from God gives power and protects life '.

When he was asked whether he regretted to have attended the flag off campaign of the Governor of Ekiti State, Dr Kayode Fayemi where he was shot and probably might have profited him the senatorial candidate of his party? Michael Bamidele opined that he didn't regret to have attended the flag off as a party man and being a senatorial candidate and in the next few months as a senator is not as result of being shot but a promise from God.

The APC senatorial candidate promised to continue to serve God with his belongings. He further assured to assist the Church in the ongoing auditorium project quarterly as from next year with 250.000 totalling 1million by next year ending.