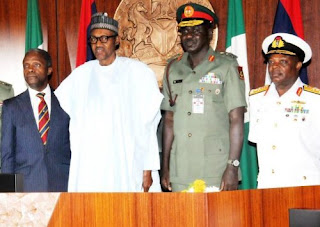 The president met with the security chiefs to discuss the alleged attack of army camp by Boko Haram terrorists and advised Nigerians against making a political capital out of the national tragedy
.
President Muhammadu Buhari on Sunday presided over a meeting of security chiefs at the Presidential Villa, Abuja, as part of the ongoing efforts to engage military and intelligence community towards addressing Boko Haram insurgency.

Confirming this development in a tweet in Abuja on Sunday, the President’s aide on New Media, Bashir Ahmad, said all the service chiefs, the Inspector-General of Police, Idris Ibrahim and the Director-General of the Department of State Service (DSS), Yusuf Bichi were part of the meeting.

“All the Service Chiefs, IG of Police and DG of DSS were at the State House this morning. As President Buhari said (Saturday) yesterday, in the coming days, he will be engaging the Military and Intelligence Chiefs in extensive discussions on the next steps we shall be taking,’’ Ahmad said in the tweet.

President Buhari had pledged on Saturday to ensure that the loopholes which led to the fatalities are blocked once and for all. On 18 November, the Al Barnawi faction of Boko Haram attack the 157 Task Force Battalion based at Metele in northern part of Borno state, killing scores of Nigerian troops.

“In the coming days, I am engaging the military and Intelligence Chiefs in extensive discussions on the next steps we shall be taking.” The president noted that fighting terrorism had taken a global dimension which necessitated international collaboration among states facing similar security challenges.

He, therefore, reassured Nigerians of his continued commitment to their security and of his efforts to sustain the momentum in the previous significant successes recorded against the terrorists.

The president, however, advised Nigerians against making a political capital out of the national tragedy, stressing that “members of the armed forces are one family, commonly committed to the security and safety of all Nigerians.’’

Legit.ng earlier reported that President Buhari summoned Service Chiefs to an emergency security meeting over the reported killing of some Nigerian soldiers by Boko Haram sect along the Nigeria-Chad border on Sunday, November 18.
News