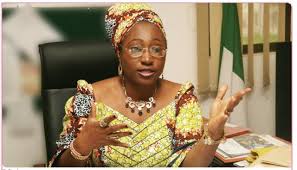 Wife of Ekiti State governor, Erelu Bisi Fayemi has charged Ekiti Youths to invest their time and resources on things that are important.

She made this charge yesterday, November 3rd, 2018 at a Youth Summit in Ekiti State tagged: The Convergence, which was held at Amazing Grace Hall along Ekiti State University road, in Ado-Ekiti, the State capital.

While addressing the youths at the summit, she urged them not to be carried away by happenings on social media and unimportant things but invest on things that will add values to their lives.

Erelu who revealed that she had been hearing about the program, as it had been on the social media, especially on twitter for some time now, said she did not get an invitation letter to the programme but made it a responsibility to be there.

Also present at the event was a former House of representatives hopeful in Ekiti South Federal Constituency 1, Mr Makinde Araoye, who gave a keynote address on Politics. He however shares his experience in Politics, how he started and the journey so far.

The first Keynote speaker, Rev. Tope Popoola who spoke about entrepreneurship charged the youths to always take responsibilities and was of the opinion that the generation of youths today are always scared of taking responsibilities which is why they were not developed.

Mr Zadok Akintoye, a motivational speaker, talked on Leadership and public policy. Inspired the youths to be self dependant and imbibe the superior complex culture. He said, "leaders are people who have made a lot of mistakes in life, if you do not have some certain experiences in life, you can't lead others. It is also important to be ready to take responsibilities as leaders are people who take responsibilities".

The organizers of the event while responding to Erelu Bisi Fayemi's claim that she did not get an invitation to the programme, apologized for the great omission as it was not intentional and thanked the wife of the governor for being humble enough to still attend the summit.

Also present the event was, a former House of representatives aspirant in Ekiti Central Federal Constituency, Dr. Jimlas Ogunsakin, Moremi of Ife, Mrs Helen Oni, Mr Ogunsakin, Kitan Davies and some other notable youths in the state and beyond.

Below is one of the overviews/documentaries  of Ekiti State and her values, written by a journalist, an online media practitioner and an Ekiti Youth, Femi Oguntayo:

TOPIC: The Convergence: Ekiti from the onset and of now

Good day everyone, I am honored to be here today and particularly, to be standing here to address my fellow Ekiti youths. The theme of this wonderful and laudable programme, ‘The Convergence’ is a powerful and thoughtful one. It means, the coming together, of great people, of youths, of young people, to converse about their growth and development as a people, which is very sacrosanct. I must commend the organizers of this event for job well done.
Very briefly, I will be talking on the topic: Ekiti from the onset and of now. I will be introducing this topic with an extract from the essay that I wrote during the JKF Essay writing competition last month, which made the top 5 in the Post Graduate Category, titled ‘Reclaiming Our Land and Restoring Our Values: The Ekiti of my dream’.

“
*As a youth and a communication expert, I will play my part by projecting our dear state to the world through all the means available to me. There is a need to change the orientation of our people and make them see why we need to start thinking differently. We need to present ourselves as people of honour and integrity which we were known for; we need to reclaim that trust which people had in Ekiti people. We need to start seeing the need for us to move forward, the need for us to stop eating from the crumbs that fall from the table but be the employers of labours.*
”

From the extract above, you will see that I said “As a youth”. Yes! As youths, we need to contribute our quota to the development of Ekiti State. It is no longer news that we are no more the leaders of tomorrow but leaders of now. Thank God we have great youths, young people, men and women of substance here today, when I see these people, I see a brighter future for Ekiti State. These are people who will transform this state to what it used to be, and make Ekiti State the Pride of the nation. I will however be talking from the moral point of view.

Talking about Ekiti from the onset, Ekiti used to be a group of brave people, respectful people, people of integrity, people of great honour, proud people, and so on and so forth, the list is endless.  I was having a tete a tete with my grandpa sometime last year and he was like, “Only God knows what will be of Ekiti, with your generation”. He said nowadays, you see young people disrespecting people old enough to be their fathers, you see young people involved in all manner of vices. No young person could be trusted anymore and we have definitely lost the values we were known for.

Sijuwade then said, “Give the motorcycle to him”. His worker objected and said, “but sir, we do not know…” his boss cut in, “Don’t worry, give it to him, he will balance up, HE IS FROM EKITI”. The man was given the motorcycle, he took it home (Ekiti) and after some months of work, he went back to Ibadan to pay the balance of N20. The worker at the shop was surprised to see the Ekiti man coming back to balance up, then his boss told him, “I told you, HE IS FROM EKITI”. “This was the Ekiti people I used to know”, my grandpa said. According to him, people trusted Ekiti people with their things than with other tribes.

Can this be said of you and me today? That ‘he can be trusted, HE IS FROM EKITI’, can people trust you with their property? Do you give respect to whom respect is due to? Where ever we find ourselves in the world, when people hear or know that we are from Ekiti, what do they think or say about us? We need to be very mindful of that. For us to reclaim that trust and restore those values of ours, it is a collective mission of every one of us sited here today, we the youths!

Ekiti of before and Ekiti of now should not be totally different, we ought to be rebranded Omoluabis, and not the other way round.
You may be surprised I am coming from this angle, well, do not blame me, I am a Philosopher, a moralist and a communicator, hence, the need to play my own part as an Ekiti youth, by projecting the moral standards of a typical Ekiti Man.

I hope I was able to pass a message across?

Thank You For Listening
Once Again, I am Abasi-Femi Oguntayo
News