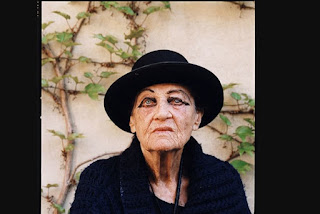 Africa is very blessed with a beautiful tradition and culture. It is no wonder that several foreigners come to the country to be a part of such lovely displays. Nigerians are awed by the story of Austrian born woman, Susan Wenger, now popularly known as Adunni Olorisa, who came to the country and made it her home.

It all started when Susan and her first husband, Ulli Beier, came to Nigeria. Beier was a German researcher and a linguist while Susan was an artist. Susan worked as an artist in Nigeria while her husband was a lecturer at the University of Ibadan. They lived together in Ede, Osun state.

While in Ede, Wenger became interested in Yoruba rituals despite not being able to speak the language. She reportedly got close to Ajagemo, one of the last priests of Obatala worship. However, Susan and her husband later moved to Osogbo and they divorced soon after.

Beier moved back to Europe while his ex-wife stayed behind to learn the art of being a priestess. The huge turning point in Susan’s life came when she fell seriously ill with tuberculosis. The sickness was slowly killing her till medicine men came to her aid and gave her herbal mixtures which healed her.

After she fully recovered, she dedicated her life to the orisa that saved her from death. Being an artist with knowledge of Yoruba tradition, she used her art works to express herself. Susan eventually gave love another chance. She got married to a local drummer, Chief Ayansola Oniru Alarape, but they later separated because he maltreated her. The artist later adopted 12 Yoruba kids whom she cared for.

Susan Wenger was responsible for preserving the sacred Osun forest. She made sure to also decorate the grove with several of her art works and works of other artists. Because of her efforts, the Osun grove was declared a national monument and in 2005, it became recognised as a world heritage site by the United Nations Educational, Scientific, and Cultural Organisation (UNESCO). On January 12, 2009, Susan passed on at the age of 93.
Entertainment Photo Speak