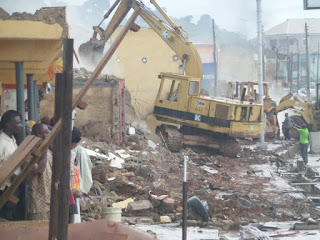 Victims of the building demolition done by the immediate past administration of Mr Ayo Fayose in Ekiti have cried put to the incumbent government for compensation.

The victims who are mostly residents of Ijoka Community in Ado-Ekiti accused the former governor of turning them to refugees in their own land.

They claimed that their houses were demolished without prior notice while majority of them were not paid compensation while the few compensated were given peanuts not up to the value of the structures pulled down.

According to them, the former  governor allegedly destroyed their ancestral buildings where certain traditional rites were performed in Ado Ekiti which they claimed had negative effect on their tradition and custom.

The Ijoka elders and other residents, who were led by the Elejoka, Chief Lawrence Omodara, made the revelations during a courtesy visit to the Deputy Governor, Otunba Bisi Egbeyemi.

According to a statement signed on Wednesday by the Special Assistant (Media) to the Deputy Governor, Odunayo Ogunmola, the community leaders said some of the house owners died as a result of their inability to recover from the shock that resulted from the demolition.

They, however, sought the assistance of the state government for their compensation to be paid adding that their demands for compensation from Fayose did materialise before he left office on October 15.

One of the community leaders, Mr. Joseph Fagbuaro, said Fayose gave them several appointments to meet on the issue of compensation which the ex-governor did not honour until the expiration of his tenure.

He complained that the demolition of the buildings had rendered many members of the community, especially the aged despondent and destitute as they now move from one rented apartment to the other.

Fagbuaro said: "Truly what happened to us in Ijoka in the last administration was not proper, it was about 5 O'clock in the evening that the former Governor Fayose started demolishing our houses, destroyed our properties and our ancestral homes; where we used to perform traditional rites during some festivals in Ado Ekiti, without notifying us, without discussing it with anyone what he (Fayose) wanted to use the houses or the land to do.

"We appreciate you (the Deputy Governor) for granting us audience, all attempts to make our plight known to the government during Fayose regime were unsuccessful, he gave us appointments several times but failed to attend to us.

"Our houses were demolished without prior notice alongside with our belongings inside the houses.

"Some of us went to the farm before we returned, our  buildings had been pulled down.

"Please help us, some of us died because they had nowhere to go, when their houses were demolished because it is not all of us that have children that built houses.

"Some keep renting houses about, imagine somebody of my age, 73 years just going about to rent house.

"This is why we are here, please help us, some of us are now refugees in own native land.

"Also, majority of us were not compensated at all while those who were compensated got peanuts compared to the value of what was destroyed.

"The whole Ijoka community was about going to extinction, all our buildings and lands had been demolished and cleared for road by the past administration.

"We plead for the intervention of  the State government, we want the restoration of our ancestral home, we don't want our community to vanish like that and we want our people to be properly compensated as well."

Responding, Deputy Governor Egbeyemi who expressed surprise over the claim that majority of the people who houses were demolished had not been compensated assured them that the government would investigate the matter.

The deputy governor appealed to them to exercise patience and also stand on the truth always.

Egbeyemi said: "My boss, Governor Kayode Fayemi, like people to be straightforward because he upholds the virtue of integrity and truthfulness."
News