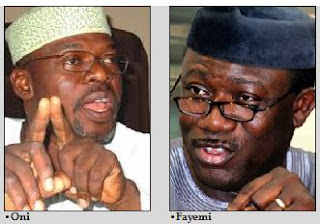 Justice Ushe Agomah of the Federal High court sitting at the new lyin road in Ado-Ekiti today  declared that she would deliver judgement on the eligibility case between the incumbent governor of Ekiti State, Dr. Kayode Fayemi and his closet rival in the governorship primary election of June 14, 2018, Engr Segun Onions of All Progressive Congress respectively.

Leading counsels to Engr Oni, Chief Tony Adeniyi, Dr lfe Arowosoge, Mr Omotayo Oloruntola and others had informed the court of his amended motion before the court.

Justice Ushe Agomah ruled in favour of Barrister Tony Adeniyi's amended motion since his colleagues didn't oppose it which means it has merit and asked him to present his motion which he did without wasting my time.

Meanwhile, Justice Agomah had earlier thrown out the motion on notice by Barrister Ajayi Olowo seeking to be joined as fourth respondent as an interested party having participated in the June 14, governorship primary of the All Progressive Congress for lack of merit since the plaintiff did not recognize him in his petition to the court and beating in mind that Mr Olowo didn't state it in his motion on notice the likely damage to cause him if he was not joined rendered the motion useless. He therefore struck it out.

Mr Olowo, when asked outside the court what would be his next line of action since his motion had been thrown out, assured that he would appeal the judgement .

In another dimension, Chief Tony Adeniyi took time to praise the court and Mr Rafiu Balogun over the peaceful access to the court without hindrance from the hoodlums he claimed to be All Progressive Congress thugs having reported to the court yesterday.

Mr Rafiu Balogun and his colleagues also expressed their minds to the peaceful conduct of the case as Dr. Kayode Fayemi and Engr. Segun Oni are members of the All Progressive Congress and they would not want the destabilisation of the party. All the lawyers in the suit took time one after the other to express their confidence in Justice Ushe Agomah's judgement on the motions discharged so far.
News Photo Speak